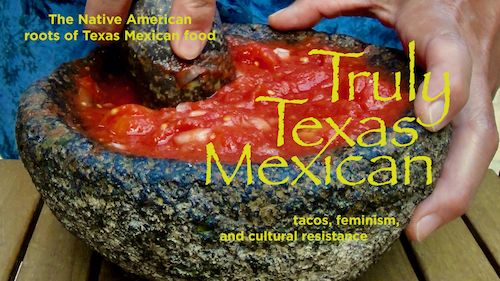 Today we are so excited to share with you the “Truly Texas Mexican” official trailer and to invite your comments and reactions.  The movie premieres on March 1st on Amazon, Google TV and Apple TV.

Look for updates, as we approach the premiere, on the website, “Truly Texas Mexican”- The Movie

It’s the “comida casera,” (home cooking) of contemporary Texas Mexican American families. Comida casera was made famous in the late 1800s by indigenous businesswomen, chefs, who operated outdoor diners in downtown San Antonio. Later dubbed “Chili Queens,” the chefs were harassed and forced out of business, victims of racism.

But other women followed in their footsteps and now tell their story. The road movie weaves through Texas cities, naming the racism that erased Native American history and celebrating the food that kept alive the community’s living memory and heritage. Chefs, artists and community leaders open up about intimate food experiences that shape who they are today.

Food narrates who we are and constructs new ways of understanding what it means to be “American.” Texas Mexican food offers a new type of cultural encounter. One of understanding, building a table where ALL ARE WELCOME.

NOTE: If you found my article helpful, I invite you to follow me on Twitter and Facebook, or subscribe below for updates (I'll email you new essays when I publish them).
Saffron Garlic Shrimp – My Tapas Memory of Madrid
Pan De Campo – ¡Viva El Rancho!