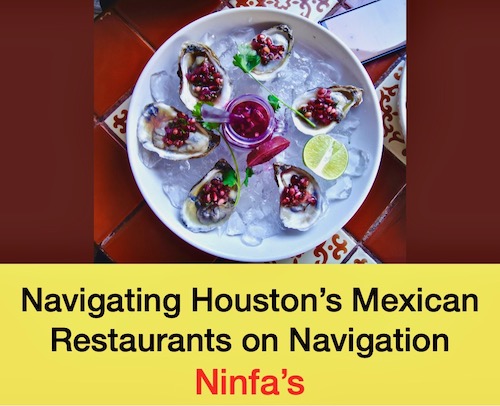 FOCUS ON HOUSTON:  Texas Mexican history is the fourth  topic in this 5-part series for diners who are looking for a unique Mexican dining experience. Houston is home to many fine Mexican restaurants, gracing every neighborhood of the city, but in this series I focus on a unique cluster of 5 restaurants on famed Navigation Boulevard in Houston’s East End.  All are Houston family-owned and with traditions spanning over 40 years.

“The best Mexican food in Texas since Texas was in Mexico” is the trademarked slogan of Ninfa’s restaurant and a reminder of Texas Mexican history.

The traditional fajitas in a flour tortilla are accompanied with pico de gallo, guac, and chile con queso. That’s a lot, it’s rich and it’s called Taco a la Ninfa, one of the original menu dishes of Ninfa Laurenzo who first opened her restaurant in 1973 and as a long-time restaurateur achieved national and international acclaim. Diners are loyal and seek out the flavors that are delicious and familiar like the chile relleno, cheese enchiladas, and the nachos, with the tortilla triangles topped individually with cheese then baked according to the original recipe of Nacho Anaya, rather than piling the chips together, popular in many other restaurants, the pile then slathered with cheese sauce. The menu is vast, with chicken, beef and pork tamales, and seven different enchiladas, from seafood to fajitas. The selection of tacos offers rabbit, salmon, redfish and octopus, certainly everything for the traditional and the more daring tastes.

The chef and staff never change anything in the dishes listed as Platos Tejanos on the menu because this Texas Mexican section is a recognizable, delectable welcome for returning customers. There are five choices of Platos Tejanos and El Henry is an iconic combination plate of a beef brisket tamal, a crispy beef taco and a cheese enchilada with beef gravy. I’m in heaven and glad Texas was in Mexico.

Yet it’s faithfulness to tradition has not limited Ninfa’s, says Chef Alex Padilla who became the Executive Chef of Ninfa’s in 2006, after the restaurant was purchased by Legacy Restaurants, LLC, and no longer connected to Ninfa Laurenzo’s family. Chef Alex has an extensive culinary background, steeped in French and American fine dining. He’s worked alongside famous names in the culinary world like Nancy Oakes, Thomas Keller and others, and has traveled extensively to Istanbul, Singapore, Greece and many other parts of the globe that have informed his palate and skills.

“It’s a matter of finding the balance between what is traditional and what can be new,” says Chef Alex. Keeping the original Ninfa’s green avocado salsa recipe, he added a few roasted tomatillos to it and made sure all the ingredients are fresh. There are no cans in the kitchen. Says Chef Alex, “the only things that should be in cans are Coca-Cola and beer.”

Adding an oyster bar was a decision that proved to be very popular. “You’d be surprised how many people like to shoot oysters,” he says. He displays a platter of six oysters on the half-shell sprinkled with pomegranate seeds and served with a dipping sauce of brilliantly red prickly pear with chile. It’s a riff on the “aguachile” that is traditional in the Mexican states of Sinaloa and Sonora on the Pacific coast.

How to change things without changing anything,” that’s the way Chef Alex views his role as keeper of the Ninfa’s heritage while at the same time offering the myriad delicious options of Mexican gastronomy. The Mexican food of Texas has yet to be fully explored by chefs, and Chef Alex is going full speed ahead with the task. He reinterprets the torta in a way that is so delicious as to forget about its national identity. He serves it with wood-grilled pork belly, jicama, cilantro and, wait for it, plum sauce and soy. It’s a seamless fusion of flavors that evoke the Vietnamese bahn mi. “Ven a mí,” (come to me) he smilingly calls his torta creation, obviously relishing the Mexican-Vietnamese connections of the Houston community.

Identity and its connection to food is something he cares about, “it’s in our genes,” he says about the flavors of Mexican food. Born in Honduras he grew up in Houston in a Mexican culture until his teenage years when he went to New York and then settled in California before returning to Houston at Ninfa’s.
At this point I realized that he was really following the Ninfa’s slogan, “The best Mexican food in Texas since Texas was Mexico.” It’s all about exploring the food connections to this land, local and seasonal but paying attention to Texas Mexican history.

Today an ever-increasing number of Mexican Americans are claiming their historical indigenous roots by identifying as Mexican American Indians. Their ancestors, some of which were the Karankawa, Lipan, and Tonkawa communities, were erased by the Republic of Texas in 1837 which declared officially that all of the Karankawa, Lipan and Tonkawa people were to be considered “as part of the Mexican nation and no longer to be considered as a different People.” So the Native Americans suddenly became Mexicans.

In the US census, the second largest Native American tribal affiliation, right after the Navajo tribal affiliation is “Mexican American Indian.” Texas culture is dynamic, evolving and so is our Mexican food. Ninfa’s is leading delicious new paths.

“We have to think out of the taco,”

“People come to Ninfa’s for fajitas and margaritas and are surprised to find that we have all this,” says Chef Alex. “We have to think out of the taco,” he says. I could not agree more. Tacos are superb and emblematic of our cuisine, for sure, but they are not the totality and are often used to stereotype us.

Chef Alex says he likes to play with flavors and to invite people to taste. In a way, he is expressing the global dimensions of contemporary Texas and our Mexican food. Before it disappears from the specials menu, hurry on over and order the grilled gulf prawn with black rice. It’s a fine-dining extravaganza. Atop a molded cone of black-colored rice is a giant prawn that’s smoke grilled (he prefers apple to mesquite for this). The rice is a delicate reference to Spanish paella. With butter he browns bell pepper, poblano, garlic and rice, and then adds olive oil, just a whiff of saffron, white wine and fish stock made in-house. Squid ink makes it black. It’s a world class Texas Mexican invention. Around the rice are thin slices of hard Spanish sausage, octopus and a chile guajillo paste for dipping.

With that last description I’ve got to end this and go eat. Since taking the culinary lead at Ninfa’s, Chef Padilla is moving the Mexican food of Texas into delicious new global territory. Looking to make food ever new and delicious, grounded in tradition, is a road of which I really think Mama Ninfa would have approved.

NOTE: If you found my article helpful, I invite you to follow me on Twitter, Instagram and Facebook, or subscribe below for updates (I'll email you new essays when I publish them).
Houston’s Cosmopolitan Traditions – Taquería Chabelita
El Tiempo Cantina – Savory Native Traditions