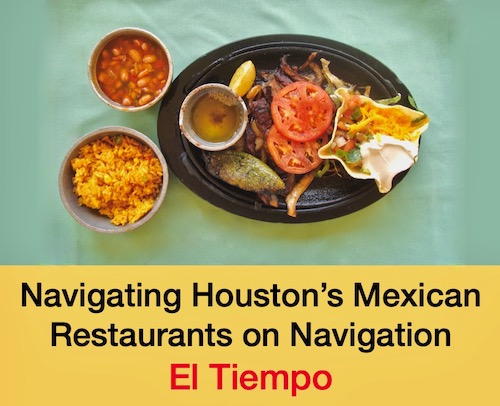 FOCUS ON HOUSTON:  El Tiempo Cantina is the final feature in this 5-part series for diners who are looking for a unique Mexican dining experience. Houston is home to many fine Mexican restaurants, gracing every neighborhood of the city, but in this series I focus on a unique cluster of 5 restaurants on famed Navigation Boulevard in Houston’s East End.  All are Houston family-owned and with traditions spanning over 40 years.

“Chile Toreado” is a hot, sizzling way to finish this five-part visit to the cluster of Mexican restaurants on Navigation, a five-cluster that reveals aspects of Houston’s indigenous culinary history. Each restaurant shows how Houston has continued to cook the flavors and use the same techniques invented by Native Americans who lived here in the last millennium.

El Tiempo Cantina serves the chile toreado as a garnish, a whole jalapeño that’s been pan-fried, tossed around rapidly in the pan until the skin begins to blister black and brown. The Spanish word, toreado, refers to bullfighting, and to the bull that’s taunted in a bullfight. That bull is angry and ain’t gonna play around. Bite into that jalapeño that’s been turned and tossed around in hot oil and you’ll see the meaning of chile toreado. I love it. It’s served as the garnish on the fajita platter, but don’t make the mistake of thinking that it’s NFG.

In culinary terms NFG means non-functional-garnish, an ingredient that’s just there for looks, a poser, and chefs hate NFG. Garnish should be part of the character of the dish, contribute to its taste, so of course it should be eaten. With the sizzling, hot-off-the-grill fajitas, it’s a natural accompaniment. I took a bite and, yum; it’s the thing to do. OK, I stayed away from the seeds which is where the burning chemical, capsaicin, is mainly stored. Charro beans, rice and a salad packed into a tortilla bowl are part of the platter, served with either flour or corn tortillas.

I can easily imagine our ancestors who first lived here in what is now Houston, cooking in this way, open fires, smoke, charred meats. Akokisa and Atakapa are the names of the two principal communities who lived in this area and along the coast in Galveston Island from 600 to 1,000 years ago. With fajitas, we continue cooking the way of our ancestors, grilling and roasting.

one dish on the menu that links El Tiempo Cantina directly to the famous restaurateur, Ninfa Laurenzo.

The menu of El Tiempo Cantina represents the canon of Texas Mexican dishes and that means soft tacos, crispy tacos, enchiladas, al pastor, chile relleno, chile con queso, and you know the rest by heart. There is one dish on the menu that links El Tiempo Cantina directly to the famous restaurateur, Ninfa Laurenzo. It’s the “Chile Relleno A La Ninfa.” It was Ninfa’s son, Roland, who founded the first El Tiempo Cantina on Richmond, after the original Ninfa’s restaurants went bankrupt and were sold to Legacy Restaurants, LLC. Roland wanted to start up again, and he did so together with his son Domenic. Today there are multiple El Tiempo Cantina locations throughout Houston.

“Chile Relleno A La Ninfa” is an egg-batter-fried stuffed Poblano chile. Completely in the comida casera, Texas Mexican tradition, the egg batter has just a tad of flour. This is the way it’s cooked in Mexican American homes of Texas and along northeastern Mexico. The filling is distinctive: pork carnitas, pecans, raisins, a hint of cinnamon and some cheese. The carnitas are small bits, with crispy edges. The combination of pork with raisins, pecans and cinnamon echoes an old Texas Mexican recipe, “turcos,” a type of empanada. As a stuffing for the Poblano it is unique and delicious. The relleno is served with a chunky, lightly flavored tomato sauce that you can either pour over the crispy batter or enjoy as a dipping sauce.

If there’s an iconic Texas Mexican dish among iconic dishes, it’s the cheese enchilada. Here, happily, it’s straightforward with cheddar and a beef chile gravy that’s flavorful and slightly piquant. I think it tastes like the enchiladas that have been served for generations in Mexican American families of Texas. Yellow cheese entered strongly into the “comida casera,” home-cooking of Mexican American families during the Depression when the government was giving out “relief cheese.” It was in many instances the only choice, and it was called, “queso relief.”

The five restaurants in these visits are a delicious continuation of Houston’s thousand-year-old indigenous past, later Mexican, Spanish, French, Anglo European and so on. The indigenous identity of the original people of Texas was erased from history when the names of  Native peoples were officially stricken from the public record and changed to the term, “Mexican.” In 1837  the Republic of Texas declared:

“The People called Lipan, Karankawa and Tonkawa your Committee considers as part of the Mexican nation and no longer to be considered as a different People.” (Texas Standing Committee On Indian Affairs, October 12, 1837)

But we continued to cook and therein lie the roots of Houston’s indigenous culinary history. The five restaurants that make up the cluster on Navigation celebrate that history and also are pushing it into new territory. The Texas Mexican cuisine is global and cosmopolitan, opening up new avenues that welcome and incorporate the enormously rich multicultural qualities and flavors that make up Houston today.