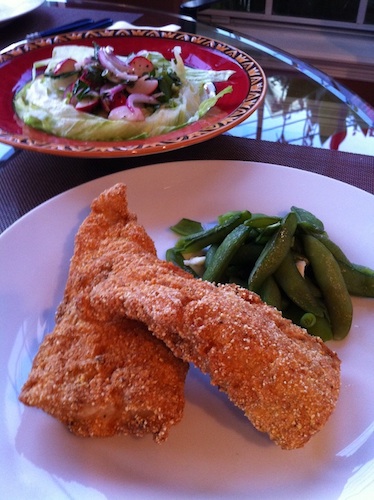 This fish fry menu includes a rich sauce and a salad.  Fish fry is traditional in the southern US, although the actual frying technique, well, not so recent. The Spanish brought it with them

“Between A.D. 900 and 1500 most Native Americans living in Texas had developed the distinct culture that Europeans and Americans encountered and would write about.” Their cuisine included various preparations of the fish they caught in the San Antonio, Guadalupe, Pecos, Rio Grande/Bravo and other rivers.  At that time the Rio Grande was not a border but, along with other rivers, an oases of food and irrigation. The Rio Grande, also called Rio Bravo, begins in Colorado and wends all the way down to Matamoros and the gulf. Along the way it meets the Rio Conchos and the Pecos.

More to the East, along the coast,(Beaumont, Galveston, Houston, Victoria, Corpus Christi) our Texas Indian ancestors dined on fish that included black drum, redfish, speckled sea trout, croaker, sea catfish, flounder, sheepshead, silver perch and mullet.”(1). Smoking, grilling, steaming, drying, salting are all traditional techniques for preparing fish which of course was regularly served with corn. This fried fish method is straightforward and reflects the penchant for coupling the flavors of fish with corn, that elemental grain that was everywhere, even in our creation myths, all the way down to what is today Southern Mexico.  But frying is a recent phenomenon.

Deep frying foods does not get a high score with healthy cooking methods, since today most of us don’t have a rural active lifestyle, but I think it’s ok once in a while. Frying is not a Native American, Texas Mexican culinary tradition.  It’s a culinary technique brought here to the Americas by Europeans who since 600 BC have been frying stuff.  According to one scholar, baking versus cooking with oil “in the pan” is mentioned in the bible, Leviticus 2:7.

So, we’ve adopted frying into our culinary repertoire, and what I love about it is that a fish fry is about community and celebration.  Southern US “Fish Fry” is a cultural tradition that goes back hundreds of years.  Also, I love the crunch in this recipe.

–Cut 6″ filets of very fresh catfish or grouper (remember that there should be no “fishy,” or other malodor at all.  If it smells bad, it’s bad.)

–dry the filets and season with salt and pepper
–dredge in wheat flour and shake off excess
–dip in a bowl of well beaten eggs, to which you’ve added just a little water. (1 teaspoon per egg) THEN immediately
–place in a bowl of corn meal.  Make sure the corn meal covers all the surfaces of the filet.  You can hold the filets in the cornmeal until you are ready to fry them.
–in a deep-fryer or deep saucepan pour enough peanut oil so that the filets (2 or 3 at a time depending on the size of the pan) can be submerged.
–When the oil is at 350ºF, place the filets in the oil and fry until the fish is a deep golden brown.  Remove with a slotted spoon (or basket) and place in rack for  holding until served. I suggest you serve it with a green vegetable, maybe snap peas, and slices of lemon.

This southern Fish Fry Menu is great for Sunday dinner!

2. I. D. Morton, Geography and history of the frying process

NOTE: If you found my article helpful, I invite you to follow me on Twitter, Instagram and Facebook, or subscribe below for updates (I'll email you new essays when I publish them).
Spanish Sangria, Always A Party Favorite
Houston’s BCN Restaurant and Mexican Fideo

5 thoughts on “Fish Fry Menu Is Native American And Spanish”