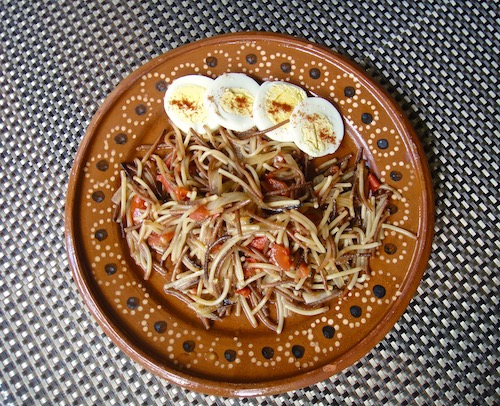 As a native Texas Mexican, I was delighted to encounter the authentic, iconic, Spanish pasta dish, fideo, on a recent visit to Chef Luis Roger’s BCN restaurant in Houston. I took the first bite and it immediately brought up memories of another authentic, iconic fideo, one that my mother served in our home in San Antonio and that is served in every Texas Mexican home that I’ve ever known, Mexican fideo. BCN was an experience of both taste and history.

The taste of Chef Roger’s fideo was familiar to me, and also foreign, fusing as it does, native with foreign ingredients. It conjured up Houston-Galveston’s fascinating part in the history of Spain’s encounter with Mexico. An encounter that would change the taste of their traditional foods.

Fideo means pasta in Spanish (fideuà in Catalan), and both the Spanish and Mexican fideo is made with vermicelli. No other type of pasta will do. In both versions, the vermicelli is first roasted in a skillet until its color deepens, and then it is cooked in broth. Both recipes base their broth flavor on spices added to a blend of tomatoes and onions. It’s this unique tomato-onion blend that my taste buds detected, and then I
connected Chef Roger’s fideo with my mom’s.

Tomato-onion is a uniquely Mexican flavor that enters Spanish cooking in the sixteenth century. When Spaniards occupied Mexico and first laid eyes on tomatoes, the red fruits were domesticated, plentiful, and used widely in native Mexican cooking. When they were exported to Spain, tomatoes were at first misunderstood and even reviled as satanic, but they eventually were loved and adopted by Spanish cooks.

Just so, Mexican cooks adopted the Spanish imported vermicelli, and now fideo is considered an authentic Mexican dish. Fideo tells the story of two cultures clashing, collaborating and changing. The Galveston-Houston part of that story began with a shipwreck rescue.

It was the winter of 1528 when the indigenous Karankawa community of Galveston Island found about 80 Spaniards, naked and nearly dead, shipwrecked on their shore. They were the first Europeans to step on Texas soil. According to Álvar Núñez Cabeza De Vaca, one of the survivors of the wreckage, the Spaniards were originally a fleet of 600 men on a mission from Spain, through Florida, “to conquer and govern the
provinces” on the western and northern coast of the Gulf of Mexico. Along the way, the 600 men dwindled to 80 as a result of crew desertions, deadly storms, and armed resistance from natives who lived on the coast and who were intent on protecting their homes from invasion.

As luck would have it, on that day the Karankawa people took pity upon the would-be conquerors, seeing them on the sand, naked, starving and close to death. Cabeza De Vaca writes in his journal: “The Indians, on seeing the disaster that had befallen us…sat down among us. And with the great grief and pity they felt on seeing us in such a state, they all began to weep loudly and so sincerely that they could be heard a great distance away.”

Much about the customs and culture of the Karankawa people has been erased, so it’s not surprising that Chef Roger was unaware of them, and also of the help they gave to his Spanish predecessors of long ago. But the Karankawa people nonetheless are the precursors of today’s Houston-Galveston communities. They demonstrated hospitality, as they fed the crew an array of fish, seafood and roots. They built fires to warm them, and then carried them, holding them tightly, all the way to their homes.

The Karankawa homes were made of poles, brush and hides, designed to be disassembled easily when the community moved from the coastal estuaries to the inland coastal prairies where, with the change in seasons, food sources were more readily available.

Living in this mobile manner, the coast was their home for over two thousand years, from Galveston Island all the way down to Corpus Christi. Many current-day Texas Mexican families claim the Karankawas as their ancestors, just as I and other families with names like Salazar, Vasquez and Medrano claim and follow the traditions of other indigenous peoples of Texas like Comecrudos, Apaches and Coahuiltecans. To me, having a soulful conversation with Chef Roger in his restaurant was an exceptional moment of sharing
history and culinary ideas, and I felt we were connected through food that was both his and mine. Simultaneously foreign and indigenous.

Karankawa served meals in earthenware. In addition to being expert fishermen and hunters, the coastal people were also inventive pottery makers. Their decorative style is known as Rockport pottery. Artisans made bottles for water, beakers and wide mouthed jars of all types. They made small and large bowls for cooking and serving the food that saved the starving men in 1528.

Just a few years earlier, in 1521, another Spanish conqueror, Hernán Cortés had captured the city of Tenochtitlan, the current Mexico City. His victory initiated the full momentum of colonization and its expansion into Texas. The indigenous peoples of Texas, including the Karankawas, were eventually called Mexicans.

In 2014, almost 500 years later, Catalan-born Chef Roger opened his restaurant, and I thought that it was a kind of second coming of Spain into Galveston-Houston. This time the encounter was not one of conquest but of hospitality. “Es muy importante,” says Chef Roger about hospitality in dining.

Houston’s BCN restaurant is at once traditional and cutting edge, an admixture of Spain’s traditions, evocative of grandma and granddad, with new flavors influenced by Ferrán Adria of El Bulli fame. Demonstrating his training at El Bulli, Chef Roger’s bold menu offers beet foam on cucumber tartare, and duck tongue confit. These are alongside the roasted fideo item.

The fideo follows the traditional style of cooking Chef Roger learned from his grandmother on his mother’s side and his grandfather from his father’s side. “Although they weren’t trained as professional cooks, they were, nevertheless, great, masterful cooks,” he says.

The broth for the fideo begins with a slow caramelization of tomatoes, onions and leeks. Chef Roger makes a soup from this base, adding cinnamon and cloves. He also adds Iberian pork that, since 2014, is now farmed in Texas. Operating Houston’s premier showcase of Spain’s cuisine, Chef Roger dresses up the fideo with slices of pork cooked “a la plancha,” (on a griddle) and sumptuous porcini and black trumpet mushrooms, drizzled with truffle oil. His fideo is irresistible.

To compare this taste to Mexican fideo, finagle an invitation to a Houston Mexican family’s home, or find one of the several Mexican restaurants in the city that serve it. The recipe starts with a blend of tomatoes and onions that is seasoned with garlic, black pepper and just a touch of cumin. It’s a heady aromatic broth that is added to the skillet-roasted vermicelli. Some families serve it accompanied by small cubes of beef that have been cooked in green chiles, and also with pinto beans slow-cooked until falling apart
tender. That is true home-style fine dining.

Dining at BCN took me on a splendid tour of Spain, and, with fideo, also surprisingly led me to celebrate my Texas Mexican heritage. I don’t much care for the conquest and ensuing colonization that resulted from that 1528 shipwreck in Galveston, but getting to know Chef Roger and tasting his delicious fideo reminded me that the encounter continues. It has become fruitful. History changes us and our food, as we strive to
become more accepting, inviting people. Hospitality, as Chef Roger says, “Es muy importante.”

1 clove garlic
8 black peppercorns
1/2 teaspoon salt
1/8 teaspoon, or slightly less, cumin
1/2 pound fideo (coiled vermicelli)
5 cups water
2 tablespoons canola or other vegetable oil
4 eggs, hard-boiled
Method
1. In a molcajete or other mortar, mash the black pepper, garlic, salt, and cumin into a fine paste. Set aside.
2. In a large sauté pan, heat the oil and sauté the vermicelli until it acquires some golden color, about 2 minutes. Add the onion and continue cooking until the onion is translucent.
3. Add a little water to the molcajete to scrape the paste from the sides and add it to the vermicelli. Add the tomatoes or tomato sauce and the rest of the water. Bring to a boil and cook for 12 minutes until the pasta
is cooked and the liquid is reduced. Taste and adjust the salt.
4. Slice the hard-boiled eggs and place them atop the fideo.

This story was first published in Houston Press, 2018.

NOTE: If you found my article helpful, I invite you to follow me on Twitter, Instagram and Facebook, or subscribe below for updates (I'll email you new essays when I publish them).
Fish Fry Menu Is Native American And Spanish
Ratatouille, Seared Scallops, And Baby Bok Choy