A Mexican Tortillera in The Netherlands Braves Covid-19 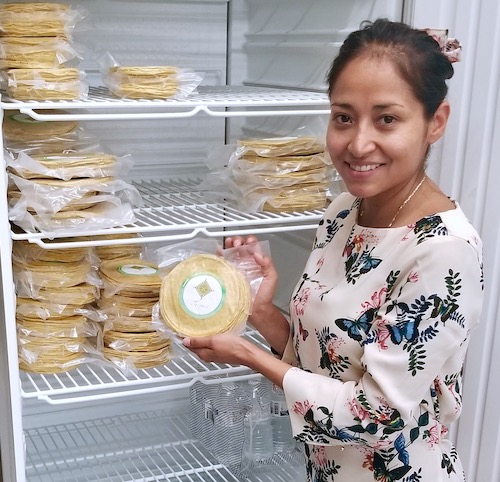 Restaurants in Amsterdam were ordered closed by the Dutch government on March 16. It was a painful step, an effort to halt the spread of Coronavirus, and the financial devastation threatens to close some businesses for good.  “Tortillería Taiyari” is the only Mexican tortilla maker in The Netherlands and the owner, Karla Plancarte, is fighting to pull through the financial chaos spawned by the deadly virus.

Ms. Plancarte is from Tlatenco, a small town on the outskirts of Mexico City, close to the famous Xochimilco floating gardens. She moved to Amsterdam in 2014 to finish her studies for her Master’s degree, and she decided to start a business selling Mexican tacos, the delicious ones, the real tastes from her home.  There was one big problem, though, there were no tortillas.

The closest tortilla vendor was over 1,000 miles away, in Vienna. The distance, the fact that fresh corn tortillas can spoil quickly, made it an unreliable source for a taco business. That’s when Karla turned her attention to making her own tortillas, having discovered a culinary need in the region.

She would become a tortillera, a tortilla maker, and she chose the name, “Taiyari,” which means “our heart” in the Huichol language of Mexico. Plancarte says that  “corn is the heart and essence of Mexican gastronomy.” Her work as a tortillera is about culture, health and history.

Only organic corn goes into her masa. She has travelled to visit the corn growers, some in Oaxaca, to get to know the small farmers who grow heirloom corn. She laments that “there’s a lot of corn that is genetically manipulated,” adding that heirloom corn is in danger of disappearing. She sees positive signs that in recent years people are fighting to protect and bring back heirloom, organic corn. “I think it’s coming back because they are really fighting for it,” she says. Plancarte sees the fight as a larger one of community and cultures, saying “it’s more to keep our roots alive, and also the communities that grow the corn,  to help them a little.”

At Tortillería Taiyari the corn undergoes the ancient process of nixtamalization, a process invented by Mexican women 7,000 years ago.  The dry kernels are cooked with slaked lime which transforms the molecular structure of the kernels, making the protein easily digestible and adding niacin, one of the essential B vitamins. It also adds a delicious nuttiness to the flavor of the corn.

Before the March 16th shutdown of all restaurants, Ms. Plancarte was delivering to over 100 restaurants and she is anxious to resume selling. Chefs of high-end, fine dining restaurants seek out her tortillas because not only are they delicious and fresh, but they are local.  Another market sector is the taquerías, taco stands, that have recently become popular in Amsterdam.

Not only taco places, but all types of restaurants, and even pubs, are buying her tortillas. “It has to do with the boom of Mexican gastronomy,” she says, “I don’t know why it’s grown so much in the Benelux,  (Netherlands, Belgium and Luxembourg), but it doesn’t matter if it’s a Mexican, or a Dutch or a French restaurant, every kitchen wants to have a taco!”

A buena tortilla, a really good tortilla, starts with perfect masa and that’s why she imported her molino, mill, from her hometown in Mexico.  It’s a stone grinding metal workhorse equipped with Mexican volcanic stone.  It’s the real thing.  Plancarte spent time in her hometown of Tlaltenco learning from her neighborhood molinos who generously shared their knowledge.

It still took her over six months back in Amsterdam to fine-tune the complicated process through trial-and-error.  She has trained her three employees in the arduous process of transforming dried corn kernels into soft, tender, aromatic corn tortillas.  She buys one or two tons of corn at a time.

She was looking to expand into a larger space because her tortillas started to sell in Belgium and Luxembourg. She was even shipping to Ibiza in Spain and to Croatia and even Greece and Sweden. But Covid-19 hit hard and overnight she lost all of her restaurant orders. She says it was shocking and frightening.

She sprang into action and consolidated two fronts. First, she negotiated about the lease of her tortilla factory and resolved pending rents, while she studies the newly announced Dutch government program of loans and other assistance. Second, she began selling her stock of freshly made tortillas to individual consumers through social media, especially on Instagram where her account is @tortilleria_taiyari.  She succeeded in selling all the tortillas that had been destined for restaurants.

She is expecting the next shipment of corn kernels within a few days and is glad she paid in advance. It was the smart thing to do. She will continue cooking tortillas, hoping that she can grow her sales to the individual consumer. This is completely new to her so she knows that it will go slow. She has no illusions, “I’m mainly worried about paying the employees.”

But  people are buying, she says, “I sold my stock to individual consumers in two days. People are willing to help, so they are buying more than they would normally.” She’d always wanted to sell to the end consumer, but did not have the time or employees to help with that segment, with social media.  Karla thinks that she may have found a sleeping market for her tortillas.

She is planning accordingly, cold-eyed about the expenses, payroll, and an unsure market.  She hopes that by June the restaurants and other businesses will open and begin to regain their financial footing. She thinks that restaurants will be cautious, that people will be slow to return to eateries, and so she remains wary.

When I first met Karla Plancarte at her Tortillería Taiyari warehouse located on the outskirts of Amsterdamn, I knew she had heart. It’s a totally apt name she has chosen: Taiyari, “our heart” in the Huichol language.

PS: Until the time comes when Tortillería Taiyari will ship to the US, here’s a recipe for making your own corn tortillas at home.

From the cookbook, “Truly Texas Mexican: A Native Culinary Heritage In Recipes”

NOTE: If you found my article helpful, I invite you to follow me on Twitter, Instagram and Facebook, or subscribe below for updates (I'll email you new essays when I publish them).
Chile Con Carne, Recipe for Quarantine Comfort
Tortilla Casserole, Delicious “Stay At Home” Dinner