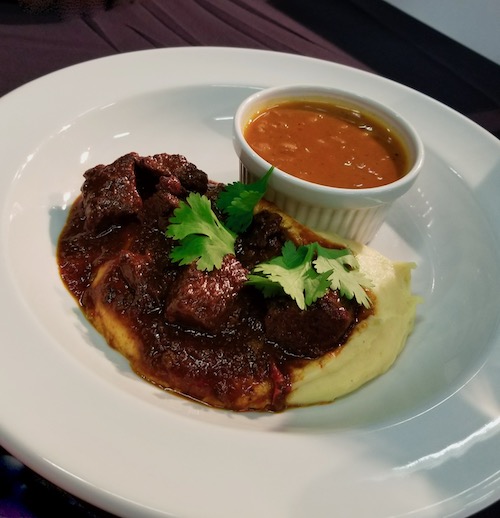 Chile Con Carne means chile with meat, and the name is often reversed in homes and Texas Mexican menus where it’s listed as Carne Con Chile, meat with chile.  It’s one of the oldest and most common Mexican dishes, although recently the word chile has been replaced with the anglicized, chili.  It refers to the same thing.  It’s like the word, tamal that was replaced with the anglicized, tamalē.

I sometimes cook native venison, and also bison now that it is more available, but the most popular is beef which started to be imported in the 1600s.

About the word, chili.  Anglo Texans who migrated from Europe fell in love with the various native dishes, all made with creative combinations of chiles.  In San Antonio, for example, Native Mexican business women operated open air food stands in the late 1800s and early 1900s. They served a wide array of indigenous foods: enchiladas, tamales, tortillas and carne con chile.  All these dishes used chiles as the predominant flavoring but it seems that when it came to the carne con chile, it was easier for the newly-arrived to pronounce it as “chili,” so it stuck as the popular term.  Nevertheless, indigenous Texas Mexican women are the originators of what is now called “chili.”

I picked out this recipe from my archives, and it may pick up your spirits as you quarantine in your home.  I use Ancho chiles as the base, Guajillo for red color, and Chipotle for a nice tang.  The other seasonings are a classic Texas Mexican combination that I think blends perfectly such that you don’t have one flavor springing up over any other.

Excerpted from the book: Truly Texas Mexican: A Native Culinary Heritage In Recipes Method:
1. Place all the chiles in a large saucepan, cover them with water and bring to a boil.  Turn off the heat and let the chiles cook for 15 or 20 minutes until they are completely soft.
2. Heat a comal or a cast iron skillet on high, then roast the onion and the garlic until the onion has softened and has black spots.  Peel the garlic after it has cooked and is soft.
3. Cut the the roast into 1/2″ cubes or smaller, trimming off the fat as you go.
4. Add 1 Tablespoon Canola to a skillet on very high heat and quickly brown the meat for only 5 seconds or so.  Set aside.
4. In a blender, place the chiles and all the spices. Add about a cup of water and blend on high to make a very smooth purée, adding additional water as necessary.  If there are flecks in the purée, strain through a fine mesh sieve.
5. Heat a dutch oven on medium heat, add the oil and then “fry” the chile purée.  Be prepared for some splatter.  Cook for 10 minutes, stirring all the while. 6. Add the beef and 3 cups of water and bring to a very slow simmer.  By this I mean that you’ll see only small, slow bubbles on the surface. Cover and cook for 2 hours, all the while adjusting the heat so that it stays on a slow simmer and does not boil.  Uncover and cook for another 30 minutes or so to thicken. Adjust the salt.

Serve the carne con chile immediately or the next day, in a bowl, garnished with diced white onion, cheddar cheese, diced and pickled Jalapeño as in this picture. Or you can be novel and serve it with a dollop of mashed potatoes, boiled pinto beans on the side.  A friend chef in Lubbock served it that way, non-traditional, and it was delicious.  Make sure you make plenty because it will taste fantastic the following day.

Stay safe. We may be separated physically, but we’re always a human family with the instinct to support one another.

NOTE: If you found my article helpful, I invite you to follow me on Twitter, Instagram and Facebook, or subscribe below for updates (I'll email you new essays when I publish them).
Huachinango A La Veracruzana
A Mexican Tortillera in The Netherlands Braves Covid-19