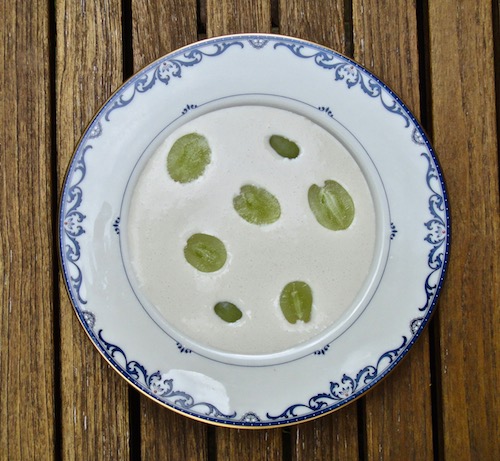 Ajoblanco is an ice-cold soup from the Andalusía region of Spain.  The English translation of ajoblanco is white garlic, and it’s indeed a beautifully white soup made with only four ingredients: almonds, garlic, olive oil, and hearty bread.  It’s humble and so delicious. It predates gazpacho, that other, better known, Spanish cold soup that is based on tomatoes imported from Mexico after the conquest.

Like gazpacho, ajoblanco originates in the Andalusía region of Spain, the southern, hotter part of the country.  There is general agreement that the soup is part of the Andalusía regional cuisine, and two towns in that region,  Málaga and  Granada, have an ongoing dispute, both claiming to have invented ajoblanco.  The town of Almáchar, just east of Málaga, holds the annual “Fiesta del ajoblanco” on the first Saturday of September. I first tasted this Spanish garlic soup in Madrid as the first course of a summer lunch.  It has a rich, creamy consistency which comes from the blanched almonds that are traditionally mashed in a mortar, but which can be easily puréed in a blender, as in this recipe. Traditional garnish is the white (green) Muscat grape, plentiful in Málaga as are almonds.

Method
1. To peel the skin off the almonds, place the almonds in a pot of boiling water for 60 seconds, no more. Drain them onto a colander and rinse them with cold water to cool. Blot the almonds dry, then press them between your fingers to peel of the skin. Set aside.
3. In a blender, add the almonds, garlic, and 2 cups of water.  Blend until the almonds are liquefied.
4. Add the bread, white wine vinegar, extra virgin olive oil, salt, remaining water, and blend until completely smooth.
5. Chill the soup in the refrigerator for two hours or overnight.

Taste and adjust the salt. If you want a thinner consistency, add a little more cold water.
To serve, pour the cold soup into bowls and garnish with the grape halves.

NOTE: If you found my article helpful, I invite you to follow me on Twitter, Instagram and Facebook, or subscribe below for updates (I'll email you new essays when I publish them).
Quelitre Makes A Delicious Guisado
Huevos Divorciados, Chupa Los Dedos Delicious!