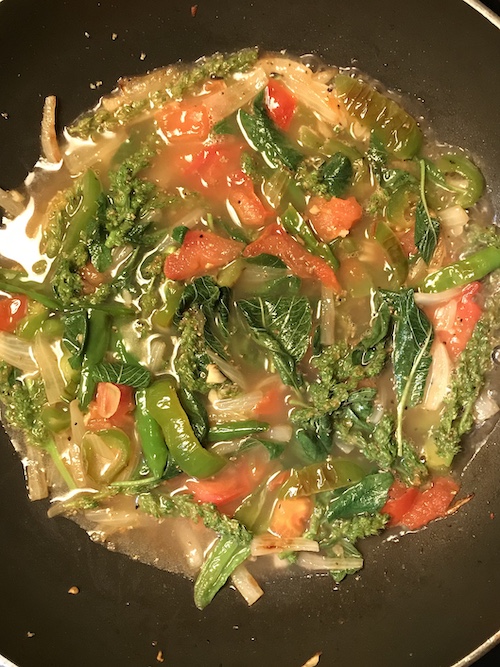 The above photograph of “Quelitre” is by visual artist César Martínez whose work is in the collection of the Smithsonian American Art Museum. He shared the picture with me, along with this detail of how he reconnected with quelitre.

Pulling weeds in his backyard, César recovered a forgotten memory.

“They were somehow ringing a bell while I pulled out the ‘weeds’….sure enough, I looked at the pic in your book and that confirmed it. From now on I intend to use quelitre….what my grandmother called it….I made a version of your ama’s guisado (from the book)…included seed stalks. I’ll be eating this often.”

“Quelitre” is what we call the amaranth plant that is native to Texas and northeastern Mexico, redroot amaranth (Amaranthus retroflexus). It is high in protein, but also contains the amino acid lysine, which is an essential building block of protein. Moreover, it also has more dietary fiber than any of the major grains. This ancient plant that provided sustenance to our Texas ancestors and my family grows in my garden, and it also pops up in the most unexpected places, like less-traveled sidewalks in cities.

Here in Texas, as in northeastern Mexico, we say quelitre, as my amá and Cesar’s grandmother did. In central and southern Mexico, it’s always quelite, no r, and often plural. Quelites is used to denote a whole array of edible leafy greens. Our Texas Amaranthus retroflexus would be considered one quelite among many different types.

Quilitl means edible greens in Nahuatl, the pre-Columbian language native to central Mexico and El Salvador. But that’s a different usage from the Texas and Northeastern Mexico region, where the Coahuiltecan language, not Nahuatl, predominated.

The Tarahumara community of Chihuahua, Mexico, grows and gathers Amaranthus retroflexus as an integral part of their diet, but outside of that community the leafy plant is not widely known.  In the Mexican American community, it was widely used, but is now a fading memory.  It’s one that we can recover, to our advantage.

Recipes for quelitre are in my new book, “Don’t Count The Tortillas: The Art Of Texas Mexican Cooking,” published by Texas Tech University Press.

Here’s a recipe of a related green that is also part of our culinary heritage, purslane, or “verdolaga.” This recipe is also featured in my new book.

Method
1.  Wash the verdolaga well and trim away any brown leaves and knotty stems.  Place in a saucepan, cover with water and bring to a boil.  Cook for 20-25 minutes until the stems are completely soft.  After they are cooked, use a slotted spoon to remove the greens,  and place them in a strainer to drain. Set the water aside.  It is a delicious broth and also makes a great stock.
2.  In a skillet, heat the oil, then add the onion, garlic, tomato and chile. Cook for about 3 minutes until the onion becomes translucent.
3.  Place the verdolaga on a cutting board and cut it into 2″ lengths.
4.  Add the verdolaga to the skillet and cook for a minute.  Add 1 1/2 cups of the verdolaga broth, bring to a boil and cook for another 5 minutes.  Taste and correct the salt.  Add a generous grinding of black pepper.

Serve hot.
NOTE:  Sometimes you’ll want to serve it as a soup and, if so, add all of the broth in step #4.

NOTE: If you found my article helpful, I invite you to follow me on Twitter, Instagram and Facebook, or subscribe below for updates (I'll email you new essays when I publish them).
Molcajete Salsa, Fried Chile De Arbol
Ajoblanco, Spain’s Cold Garlic Soup