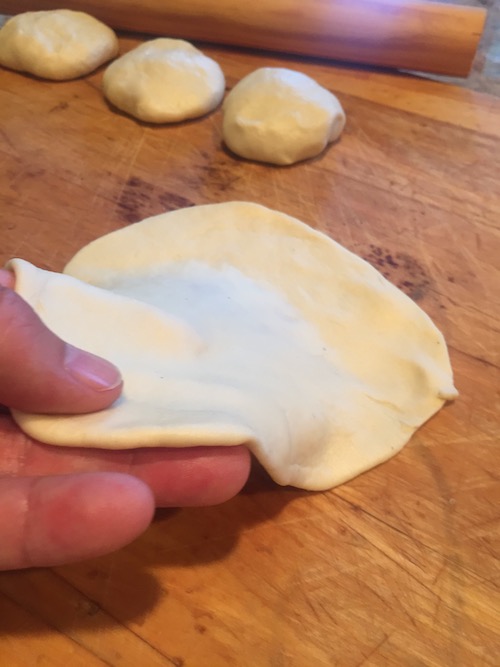 Tortillas de harina, wheat flour tortillas, have many variants along the Rio Grande and the US-Mexico borderlands.  They are fluffy and pliant in the south Texas, northeastern Mexico region, while in Sonora they are super thin, almost translucent. New Mexico has its own delicious tortillas de harina, as does arizona and, of course, California.  Each type is a  special wheat flour delicacy. Let’s not argue about false “authenticity” questions that pit corn tortillas against flour. Families switch back and forth between these and corn tortillas, depending on the dish that accompanies the tortillas.

We always use a dash of baking powder, which makes ours different from wheat flour tortillas in other regions of Mexican cuisine.  After listening for many years to heated debates about whether or not to put baking powder in wheat flour tortillas, I have come to believe that the debate is fundamentally about whether one understands that Texas Mexican exists as its own cuisine and it is not an attempt to emulate other regions where Mexican cuisine also thrives.  You can decide for yourself, given the long history of food in our Texas Mexican region.

I use a food processor because it is so much faster and you don’t have to touch the boiling water. I give precise timing in this recipe because I’ve tested the procedure and it works well.  However, there are so many variables to working with wheat flour that you will have to be attentive and find your way through the process.

There are four things to keep in mind.  First, use boiling water, it makes for a soft tortilla. Second, knead until the dough has a slight sheen. Third, let the dough rest after kneading it. And fourth, make a “testal,” by rotating a ball of dough with your hands while pinching the edges and folding them under to fashion a little round pillow that has an indentation on the underside.  The word “testal” is from the Nahuatl word, “Téxtatl” and refers originally to the ball of corn masa that is used to make corn tortillas.

I hope you will find the learning process worthwhile because these tortillas are really wonderfully soft and delicious.

This recipe is excerpted from the book: “Truly Texas Mexican: A Native Culinary Heritage In Recipes” published by Texas Tech University Press

Ingredients  (makes 1-1/2 dozen)
4 cups all-purpose wheat flour
1-1/2 teaspoons salt
1/2 teaspoon baking powder
1/2 cup palm oil shortening or other  shortening with no trans-fats. This can be lard, if the lard has no additives nor trans-fats.
1 cup boiling water

1. In a food processor, with the blade attachment, place the dry ingredients and pulse a couple of times.

2. Add the shortening and process until the shortening is completely blended, or about 10 seconds. There will be no granules, but if you squeeze the flour between your fingers, it will stick together.

3. Process again and as you do so, add the boiling water slowly until the flour forms a ball of dough. This will take about 20 seconds.

4. Place the dough in a bowl or cutting board and knead it with gusto for 6 minutes until it is shiny and definitely elastic. Set it aside to rest, covered, for 20 minutes.

6. Use a “palote”, rolling pin, to roll each round tortilla to a thickness of 1/8 inch.

Turn yet again and cook each side another 20–30 seconds.  Make sure that the tortilla is completely cooked. We do not eat raw or under-cooked dough.

I eat these straight off the comal, sometimes with just a small dab of butter.  My childhood and teenage years rise up as anchoring memories in my palate.

But, of course, the universe intended that we make tacos, so you can make egg and potato tacos, egg and chorizo tacos, or another of the many delicious dishes.

NOTE: If you found my article helpful, I invite you to follow me on Twitter and Facebook, or subscribe below for updates (I'll email you new essays when I publish them).
Almejas Con Chile Y Tomate, a.k.a., Fettucine Vongole Fra Diavolo
Working man/woman’s Dinner