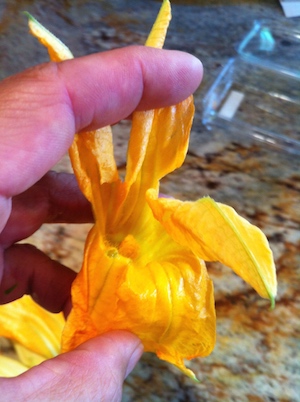 This stuffed squash blossoms recipe is a sure “wow” factor at parties. Guests swear that the rich texture comes from cream or cheese, but it doesn’t.  The sumptuous texture derives from the beans, slowly and properly cooked.  Another reason these are a party hit is their Texas Mexican archaeological history, dating back to 4,000 years ago.

The vast majority of squashes that are consumed worldwide have their origin in squash species that were domesticated in Mexico, all of them belonging to the genus, Cucurbita.  It’s the first plant known to be cultivated in Mesoamerica, the oldest evidence going back 10,000 years, seeds found in a cave in Oaxaca.

But during ancient times squashes were domesticated also in the Texas Mexican culinary region.  Seeds dating to 2,000 BCE (4,000 years ago) were found in two caves near the town of Ocampo in Tamaulipas, Mexico,  just south of McAllen and Brownsville.  Archaeologist, Richard MacNeish, excavated the two sites in 1953-54.

It was after the conquest of Mexico and the USA that squashes began to be distributed and enjoyed worldwide.  History makes these little squash blossoms…….intellectually delicious!

This stuffed squash blossoms recipe is adapted from the cookbook, “Truly Texas Mexican: A Native Culinary Heritage In Recipes.” 24 zucchini squash blossoms, the pistil removed with a knife or scissors
Canola oil for sautéing

Method
For The Chorizo and Frijoles Filling
1. Pick through the beans to remove any little rocks or debris, and then rinse them in a colander. If you have time, place the beans in a container, cover
them with water, and let them soak overnight. Then drain them and discard the water. At this point, the beans will be ready to cook and take less time than
unsoaked beans. I never soak them, nor did my mom.
2. To cook the beans, place them in a pot and add the salt and enough water to rise 3 inches above the beans. Bring to a slow simmer and cook on low
heat, covered, for 4 hours, or 1-1/2 hours if they have been soaked. To test for doneness, press one bean between your thumb and forefinger. It should
be completely soft and offer no resistance.
3. Mash the beans with a bean masher or in a blender.  Set aside.
4. Heat the oil in a skillet and cook the chorizo until it is slightly crispy, about 10 minutes.
5. Add the onions and cook for another 2 minutes.
6. Add the beans to the chorizo mixture and mix well. Adjust the salt.

To Stuff The Squash Blossoms
7. After you have removed the pistil from each squash blossom, fill a pastry bag with the bean and chorizo mixture and pipe 1 tablespoon into each blossom.
Carefully close each blossom and set aside.
8. In a skillet, preferably nonstick, heat 1 tablespoon canola oil on medium high to the point that the surface has a slight shimmer but is not smoking. Add
the blossoms and sauté them 1–2 minutes on each side so that they become a little crispy. Add the second tablespoon of oil halfway through cooking.
Serve them on individual plates or on a platter. You’ll find they are delicious appetizers rich in history.

NOTE: If you found my article helpful, I invite you to follow me on Twitter, Instagram and Facebook, or subscribe below for updates (I'll email you new essays when I publish them).
Mexican Queso — The Original Mexican Party Dip
“Café De Olla” Mexican Coffee Makes My Day!