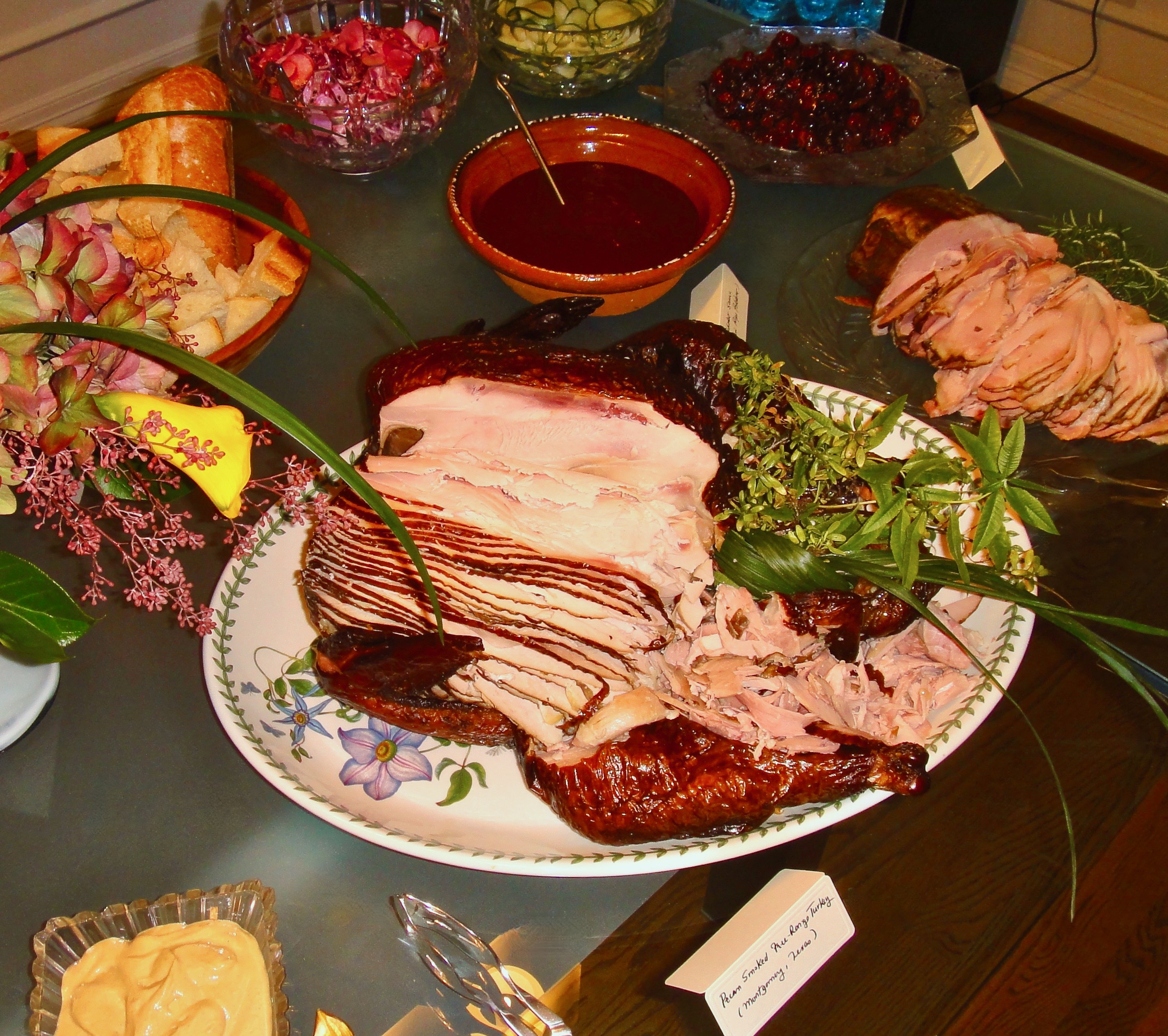 Happy Holidays.  How about a smoked guajolote, turkey for Thanksgiving.

The guajolote, turkey, is native to Texas and Mexico.  Over millenia, it was hunted by Native Americans for feathers, food and fashion.  Some of the bones (the hollow ones) were fashioned into necklaces.  It was also domesticated as early as 200 BCE, according to archaeologists.  The archaeological evidence of domestication includes the presence of juvenile turkeys, pen structures, egg shells, and human transport of the species outside its natural geographic range.

Sacred to the Mayas, and enjoyed at banquets by the Aztecs, the South Mexican Turkey, guajolote, is our most common Thanksgiving turkey. The Spanish name, guajolote is from the from the nahuatl word, “huexólotl,” which translates as “big monster” (hueyi = big;  xólot = monster), which describes its large size, plumage and “snood” that hangs from its beak and that engorges with blood and extends to hang down over the beak when the male is strutting.

The Mexicas (Native, indigenous Mexicans) related the bird to the God Tezcatlipoca and to the gods of the sun and of life.  In Texas, domestication occurs at approximately the same time.  This graphic shows where the various types of turkeys roamed and were domesticated.  The earliest remains are found in central Mexico and Texas, north/central Southwest US.

The peak of turkey husbandry (AD 1200–1500) ended just around the time the Spanish conquerors stepped foot in Texas.

Smoking the turkey is an ancient, traditional technique, and it’ll make your meal special.  I’ve taken this recipe from my archives.  It renders a beautifully moist and flavorful bird.  Serve it with this “Chile Ancho Adobo” for a truly Texas Mexican table.

(If you don’t have time to brine the turkey, smoking it will still be great tasting)

To prepare the turkey for smoking, this is what I used to make the

Brine:
3 gallons warm water
1 lb salt
12 ounces light brown sugar
1 Tbs onion powder
1 Tbs garlic powder
Stir until the sugar and salt have completely dissolved then let the brine cool down completely.
Method:
1.  I used a syringe to inject some of the brine into the meat. the total amount of brine should be 10% of the weight of the turkey.  Here’s the math for a 15 lb turkey.
15 X 16 ounces = 240 ounces
240 ounces X .10 = 24 ounces of brine. (FYI: One fluid ounce of water weights exactly 1 ounce)
2.  Using a plastic or stainless steel container, submerge the turkey in the brine and refrigerate for 3 days. The container was too heavy and large for my refrigerator so I partially filled a large ice chest with ice and a little water and set the container in it.  Closing the ice chest, the temperature is maintained at a safe 37-39 degrees F
3. After the third day, remove the turkey from the brine, rinse it thouroughly with fresh water, pat dry and place in the fridge, uncovered, for 16 hours until a pellicle forms on the skin.  This tacky glaze will help absorb smoke and keep in the moisture.  I hate to say this but in the interest of efficiency, omit this step if you don’t have time to do this or if there’s no room in the fridge.
4. Smoke the turkey in Pecan wood at 185 F for about 6-8 hours until the internal temperature reaches 165 F.

Let me know how it turns out if you decide to enjoy a smoked turkey for Thanksgiving.
¡Feliz Día de Dar Gracias!