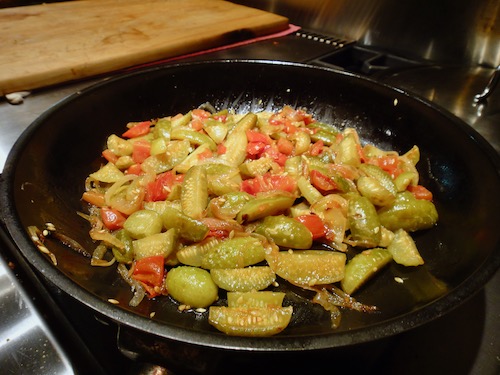 I learned about pepinos del monte (wild cucumbers) from Homero Vera, a historian who is also a rancher in South Texas who showed me that they grow in his ranch and all over south Texas and northeastern Mexico.  They look like lilliputian watermelons.

Known also as Mexican sour gherkin, it is native to Mexico and Central America. It’s not really a cucumber.  It has its own scientific genus, Melothria Scabra, and is a cousin to the cucumber and the gourd.  Botanists are still fighting about where it belongs, in this or that genus, but Native Americans have been cooking with it, eating it raw and using it as medicine since before the conquest.

Bite into a fresh one, and it tastes of crisp cucumber, mellow sorrel, with a tinge of  tart. It’s also called sandiita (little watermelon), cucamelon and mouse melon. It’s for salads, for stand-alone dressed crudité or for guisados as in this recipe.

Only if you live in South Texas and the Rio Grande Valley will you be able to enjoy these delicious gems. So, for this recipe, you’ll have to grow your own.  There are many online sources for the seed.  They are not difficult to grow, very productive into the fall.

Over four years Mr. Vera published El Mesteño: A Monthly Magazine About Mexican American Culture and Heritage in South Texas and Mexico. Every issue included recipes, and this one is adapted from his Guisado de Pepinos del Monte. After he stopped publishing, Mr. Vera generously made many of the stories and essays available online. It is a treasure site for scholars, cooks, researchers interested in Texas Mexican traditions and our living heritage.

Pepinos Del Monte recipe is from my new cookbook about The Art of Texas Mexican Cooking. Method
1. Wash and scrub the pepinos del monte with a brush to remove the fuzz or any spines.
2. Place them in a saucepan, cover them with water and bring the water to a boil. Cover and cook them over medium heat for 20 minutes.
3. Drain them in a colander and when they are cool enough to handle, slice them in half lengthwise or dice them. Set aside.
4. In a skillet, heat the oil over low heat. Add the onion, jalapeño (if using the chile) and salt and cook for 3 minutes until the onion is translucent. Add the tomatoes and pepinos; cover and cook on medium heat for 12 minutes, until the outer peels are tender.

Serve hot. Pepinos can be served as a side dish just as you would serve any green vegetable.
Because they are so delish, and largely undiscovered, you’ll likely hear wows from your guests.

NOTE: If you found my article helpful, I invite you to follow me on Twitter, Instagram and Facebook, or subscribe below for updates (I'll email you new essays when I publish them).
Texas Pecan, “Pacane,” Stuffed Mushrooms
Jicama and Strawberry, A Delicious Duet For These Almohadas (Pillows)