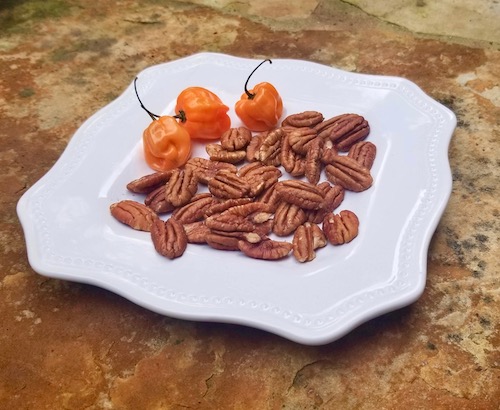 Habanero rum pecans / Nueces Con Ron y Habanero, somehow fit this Christmas Covid moment because although they’re everyday pecans, the rum and habanerio give them a special bite that is celebratory.

Both the nut and the word pecan are Native American. European immigrants were not familiar with pecans, which reminded them of walnuts. In today’s Spanish-speaking communities of Texas, we call the pecan, nuez, (walnut, nut), which is what the Spaniards called the pecan.

Near Del Río, Texas, archaeological evidence dates the pecan back five thousand years. Native cooks would grind and mix them with seeds and grains for a nutritious protein-rich meal (Dial & Black, 2006). Cabeza de Vaca attested to this in the 1500s when he traveled along the San Antonio and Guadalupe Rivers, whose banks were lined with pecan groves (Cabeza de Vaca, 1542).

This recipe is from my history/cookbook, “Don’t Count The Tortillas: The Art of Texas Mexican Cooking.”

1. Preheat oven to 325 ̊F.
2. In a saucepan, add the water, rum, habanero chile, and salt and bring to a boil.
3. Add the pecan halves and simmer on low for 10 minutes.
4. Using a slotted spoon, transfer the pecan halves to a baking sheet and bake for 30 minutes until the pecans are completely dry and roasted crispy. Check closely after 20 minutes to make sure they do not burn.

Allow to cool completely before serving.