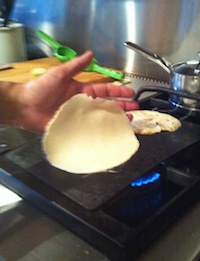 The corn tortilla. Think of it as, well, not a wrap.  Not a pita.  Not bread, and certainly not a shell. Erase such conceptions and associations, then give a fresh look at this iconic food.  In culinary terms, an iconic food is one that is typical of a region and serves as a vehicle for understanding its people and culture.  (This is excerpted from my book, Truly Texas Mexican: A Native Culinary Heritage In Recipes.)

Corn is first grown in Mexico starting in 5000-7000 BC according to archeological evidence found in caves around the Sierra de Tamaulipas between Monterrey and Mexico City and also in Tehuacan near today’s Puebla. (Gershenson, 2007)   Teosinte is the native name of the early plant from which corn descended.  Moving northward, corn was shared from one community to another and appeared in the US around 3500 BC, according to archeological evidence from a cave in New Mexico. (Berzok, 2005)

It was shared among Native Americans with two cultural components that described how to grow it and how to eat it.  Grow it alongside beans to replenish nitrogen in the soil. Eat it after it has been soaked in an alkali solution that transforms the protein into a digestible form and boosts other nutrients, like the essential, niacin, a B vitamin, without which humans develope the disease, pellagra.  This important scientific, “molecular” process is called nixtamalization, from the Nahuatl language.

When corn was transported to Europe in the 1500’s, it traveled as a product dislocated  from its history and culture.  That was too bad because when you see only the product, you don’t know how to grow it nor how to eat it.  Eating corn without the process of nixtamalization caused widespread famine and, of course pellagra. Unfortunately, today in the US this important iconic food is still removed from its culture and not fully understood.

Right now there is an important struggle around corn. Mexican and US Native American farmers want the chemical and food giant, Monsanto, to stop planting genetically modified corn because they say it ruins the corn, the land and their agricultural practices.  Also, Greenpeace Mexico says that the mass production of corn flour, including the presence of genetically modified organisms, is diminishing corn’s nutrients.  Greenpeace emphasizes the importance of nixtamalization and fears that dislocating corn from its culture will lead to widespread mal-nutrition.  (Ribeiro, 2012)

There are a growing number of US chefs and home cooks who understand the nature of the corn tortilla, aware that it is a cultural heritage.  We insist on cooking it in the traditional way that foregrounds its natural flavor, texture, and aroma.  In most fine-dining restaurants, it is not the Chef of the starred restaurants, but rather the Latino/a line cooks who are the ones who truly understand the nature of this food. They learned it at home, their cultural roots.

If you’ve never had a real corn tortilla, try this recipe and, my goodness, your mouth enjoyment will be a revelation.

Ingredients
4 cups nixtamalized corn flour. You’ll probably have to buy the only brand being sold in most stores, the Mexican brand, Maseca, which Greenpeace Mexico says is made with genetically modified corn. Well, most of our US grocery store food has gmo’s.
3 cups water
1/2 tsp salt

Method
1.  Add the salt to the flour and mix it in, then add the water slowly as you mix with your hand to form a soft dough.  It should feel softer than play doh.  Add a little more water or flour as necessary. Cover the dough with a damp cloth and let it stand for 20 minutes to make sure the corn is thoroughly re-hydrated. At this stage you’ll notice the nice aroma of the corn.
2. Heat a comal or griddle on medium high, 375°

5.  STEPS FROM PRESS TO COMAL:
A) Gently peel off the plastic from the top of the corn tortilla.
B) Use the plastic to remove the tortilla from the press and place the uncovered side in your right hand, assuming you’re right handed.
C)  With your left hand peel off the the plastic from the other side.
D) Release the tortilla from your palm as you roll it onto the comal (In the picture I’m left handed)
6. Cook it for about 30 seconds.  Then use a spatula to flip it and cook the other side for 30 seconds.  If you overcook them they will be dry and yukky. Keep the cooked tortillas in a bowl, covered with cloth to retain the moisture.

Whether you serve these tortillas with scrambled eggs, avocado, beans, or eat them with just a bit of Serrano salsa, notice the chewy, creamy texture, and the unique roasted corn taste and aroma.  ¡Buen Provecho!

NOTE: If you found my article helpful, I invite you to follow me on Twitter, Instagram and Facebook, or subscribe below for updates (I'll email you new essays when I publish them).
Albóndigas de Chile Ancho – Chile Ancho Meatballs
Chile Relleno – Stuffed Poblano Chiles