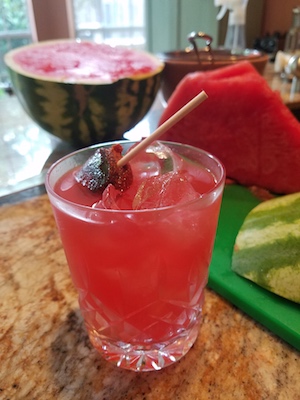 “Chicano 40” is a refreshing watermelon cocktail, the official signature cocktail celebrating the 40th anniversary of the San Antonio CineFestival the nation’s original and longest-running Chicano/Latino film festival.  Not your ordinary watermelon cocktail, “Chicano 40” is complex and bright, created by Jeret Peña, acclaimed mixologist and proprietor of San Antonio’s “The Brooklynite”. I founded the festival in 1976, and from its earliest days, the festival has always collaborated with artists from various disciplines.  An example is this 1980 festival poster I asked San Antonio artist, César Mártinez to create. To this day I am thankful that César said yes.  A copy of the poster is in the Smithsonian American Art Museum (the original acrylic painting is in my living room).

To mark this 40th anniversary year, 2016, it was natural to ask San Antonio culinary artist, Jeret Peña, to create a festival signature cocktail.  His creation, a watermelon cocktail,  is the perfect, wonderful summer cocktail. I call it “Chicano 40” because it presents flavors connected to the local Chicano, Mexican American taste and culture:  a blending of Tequila, Mezcal and Campari with a “Sandía Shrub”  (brazen concoction of fresh watermelon with vinegar). I say it’s a brazen watermelon cocktail, because when I mentioned vinegar/watermelon to some bar managers, they quaked and quivered in fear: “vinegar in a drink? No way!”  Not many professional bartenders are open and innovative enough to imagine this type of delicious cocktail.  You’ll find the flavors to be complex and nicely balanced.

A note about the film festival
The festival owes its success to the Festival Directors/Curators who over these 40 years have guided its growth.  Each director is a professional whose unique vision pushed boundaries and nurtured continual growth.  I originally named it, “The Chicano  Film Festival,” and it gained immediate national prominence, due to its unique curatorial focus: “the film art of the Mexican American community, the Chicano community, of the United States.”

From this indigenous perspective, today the festival showcases all the “Latinidades” of the Americas.  This growth in perspective is due to the diligence and commitment of the directors that the festival has been able to attract.  These are the directors/curators of the Chicano Film Festival, the San Antonio CineFestival:

The festival was born of San Antonio’s Westside, and found a supportive home at Oblate College Of The Southwest, (1976-1982), on the city’s north side, off North San Pedro Avenue.  Currently, The Guadalupe Cultural Arts Center is the home of the festival, (1983- Present).  Below is a letter from the Smithsonian Latino Center saluting the 40th Anniversary of the festival.

During this anniversary year, many filmmakers and film lovers will be mixing this cocktail and raising a glass, “Salud,” to the many supporters who’ve made the festival such a success.  So, let’s get to mixing.

NOTE:  A shrub is a concoction made with fruit and vinegar. Because I use my own watermelon/vinegar (Shrub) recipe, this version is a bit different from what you’ll taste at The Brooklynite where Jeret uses his own special “shrub.”  The shrub that he mixes is both acid and sweet and has a great balance.  Try the various shrubs on his cocktail menu, next time that you visit The Brooklynite in San Antonio.

To make the Watermelon Shrub:
5 cups Watermelon
1/2 cup Sugar
3/4 cup Apple Cider vinegar
Method:
1.  In a blender, purée 5 cups of fresh watermelon and strain it through a fine mesh sieve.  This will yield 3 cups of liquid.
2. Add the sugar and vinegar and stir until the sugar is completely dissolved.  Place in the refrigerator for 1-2 days.

To Mix the Cocktail
Note:  I replicated Jeret’s  recipe by mixing it like an agua fresca, and made a pitcher full.  For each guest, I poured it over ice and added the delightful chamoy watermelon lollipop. (I shake off excess chamoy powder from the lollipop before adding it to the drink.)
1.  Mix all of the ingredients (except the lollipops) and stir until well blended.
2. Fill an 8-10 ounce old fashioned glass with ice and pour the cocktail, garnishing with the lollipop.  ¡Salud!

This is a segment of the letter from the Smithsonian Latino Center, saluting the 40th Anniversary of
San Antonio CineFestival

Some 40 years ago a visionary and intrepid young man realized a dream — to create a festival showcasing films and videos about the Latino experience.  In 1976, little was known or appreciated about the work of mostly Mexican American filmmakers.  Little work was in distribution, little of it was accepted for broadcast, and there was no venue for the work to be seen, for filmmakers to gather, interact with the community, or support each other.

In 2016 it is important for us to pause in salute to Adán Medrano, founder of San Antonio CineFestival, and to thank him for his leadership in establishing this contryés first Latino film and video festival in this most Latino of U.S. cities. The festival has come a long way from its humble beginnings under the auspices of Oblate College.  Adán handed CineFestival off to the Guadalupe Cultural Arts Center in 1983, and into the arms of yours truly.  I did my best to continue Adán’s vision, and added a few new elements to the program.  I ended my tenure as CineFestival director in 1988.

Other CineFestival directors took charge, accomplished professionals who have added and improved the program and its reach.  I know that I join Adán in thanking all of them for their hard work and innovation in continuing this important legacy of service to our filmmakers and to our community, to whom we owe a great measure of gratitude for their participaton and support over these 40 years….Click here for the complete letter from Eduardo Díaz, Director, Smithsonian Latino Center:  Smithsonian Salute to SA CineFestival