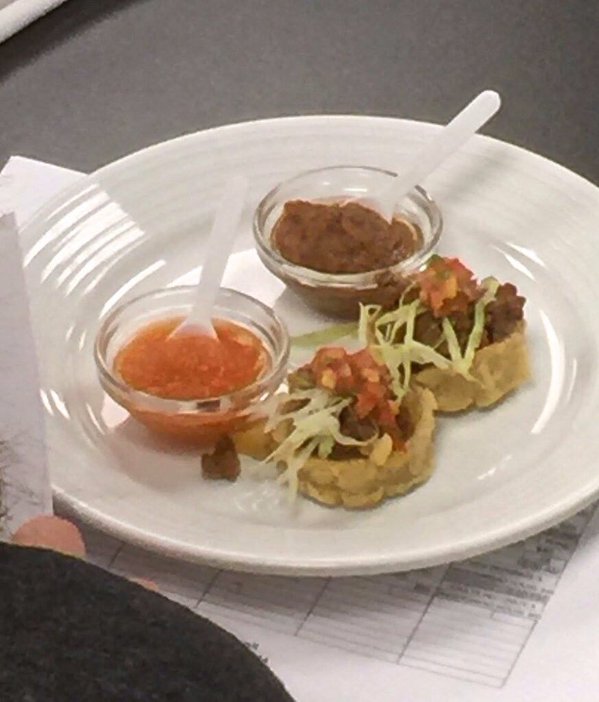 Cazuelitas or Sopes are a part of the Texas Mexican cuisine that exists in the region outlined in yellow  (Map of the 1984 Republic of Mexico). Not to be confused with Tex-Mex,  Texas Mexican  is one of at least 12 related regional cuisines in the larger geographic area that extends from San Antonio/Austin/Corpus Christi, TX, down to the Yucatán. (1)

Our Texas Mexican cuisine is both unique and similar to that of the other regions. The similarities are due to the trade routes, exchange and communication that for centuries were commonplace among the Indians in this southern part of North America. So, Texas Mexican is not an exported nor imported cuisine but one that culinarians developed over millenia in what is now South Texas and Northeastern Mexico.   The region derives its flavor profile from the flora, fauna and communities that are now partly in Texas and partly in Mexico.   Once our European ancestors arrived in the 1500s, their culinary contributions were simply added to enhance the richness of our food.  One example of a dish that is common to all regions but with delightful variations is the sope, or cazuelita. Cazuelitas were explained to me by Al Canales who commented on one of my blogs.  Similar to sopes, they are an example of how our cuisine is always evolving and staying close to family, community, memory.

Al Canales commented on a previous blog:  “Back when I was growing up in south Texas…, my tia Elena would make a dish she called “casuelitas.” (Tia Elena was Elena Bazan, the youngest of my Grandmother’s siblings.) She would fashion by hand these little corn ma sa shells and fill them with her delicious taco meat (known to us as “picadillo”). She would then fry them up in oil and serve them hot.”

Al explains this  “… photo of …a wooden press I made to facilitate making them. (3)  We have also adapted the recipe so that we bake the casuelitas in the oven and then fill them with anything we want, including guacamole. We have served these at wine tasting parties and filled them with Texas brisket. But at the end of the evening, no leftovers!” (2)

Thank you, Al and Lynette Canales.

(BTW:  If you’ve got a recipe or story about your family and food, please share it with me.  I’d love to hear from you.  Use the comment button below, or send me a personal email: Email Adansblog )

The recipe is adapted from the book, Truly Texas Mexican: A Native Culinary Heritage In Recipes
By baking instead of frying,  these are a return to our native culinary technique of baking.  Indigenous traditions do not include frying, and of course there were no pigs nor lard. Method
1. Combine the corn flour, salt, oil and water to make a masa. The masa should feel like soft and moist clay. If you need a little more water, add 1 or 2 Tbsp at a time.
2.  Cover the masa with a damp cloth and let rest for 30-45 minutes.
3.  Pre-heat oven to 350º F
4.  Roll 18-20 small masa balls with your hands and press them into thick little tortillas either with your hands or a tortilla press.  Keep them covered with a damp towel.
5. With your fingers make a high rim all around, fashioning what look like little cooking pots (cazuelas) as in the picture.  You can see above how Mr. Canales fashioned a tool for this purpose!
6. Place in the preheated oven and bake for 20-30 minutes
7. Fill them with picadillo (spiced ground beef), guacamole, Texas brisket or other filling as mentioned above.  You can top them with finely sliced lettuce and pico de gallo.

NOTE: If you found my article helpful, I invite you to follow me on Twitter, Instagram and Facebook, or subscribe below for updates (I'll email you new essays when I publish them).
Breakfast Taco, Sausage and Egg
Chile Con Queso, Party Mexican Dip