Brussels Sprouts with Serrano and Pecans 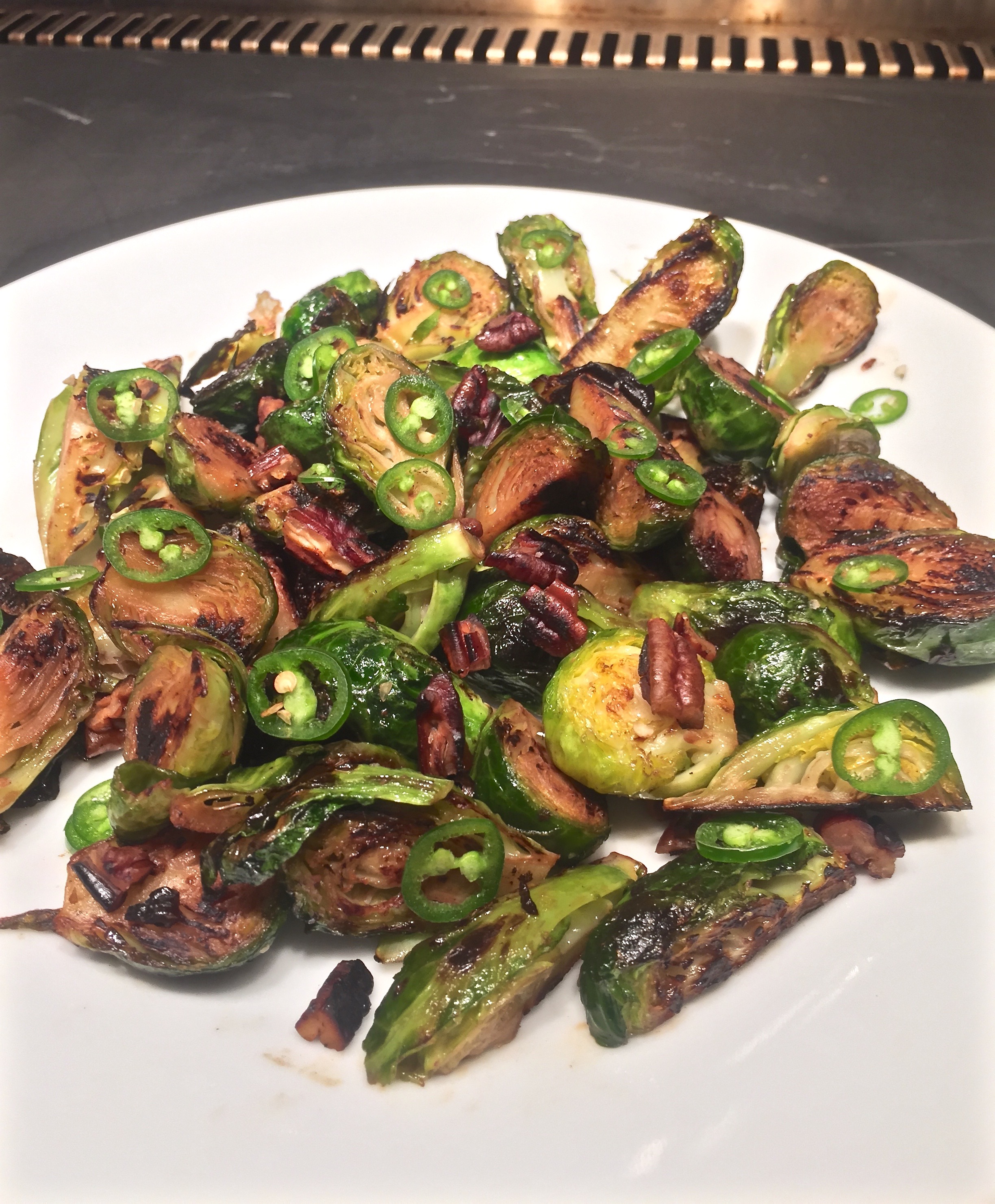 This brussels sprouts dish is a prime example of how foods evolve in delicious ways through human migration and cultural crossings. This robust dish augments the unique flavor of the sprouts (make sure you get fresh ones) with two Texas native ingredients, pecans and Serrano chile.  It’s a new twist, for sure, but it just goes to show that culture is always dynamic, creative.French immigrants brought Brussels sprouts with them to Louisianna in the eighteenth century.  From there they spread throughout the US, including Texas.

The French influence in Texas begins earlier than that, on February 20, 1685 when French troops moved into Texas, under the command of René-Robert Cavelier, Sieur Cavelier, La Salle.  Navigating through the Gulf Of Mexico, La Salle was in search of the Mississippi but landed instead in Matagorda Bay on the Texas coast.

I can only surmise that soon after the Brussels sprouts arrived in Louisianna in the late 1700s or early 1800s, cooks in Texas started to incorporate them into their dishes.  (I often lament: where were the culinarians among those French immigrants, who could have written down the details about this vegetable, whose origin and travel is steeped in mystery.)

In this dish, the Chile Serrano adds herbal flavor. I love the roasted pecan bits together with the blackened, glazed sprouts.  (More about pecans here).

Reprinted from the cookbook, “Don’t Count The Tortillas: The Art Of Texas Mexican Cooking”

Ingredients
1 lb Brussels Sprouts, washed, woody stems cut off.  Cut the sprouts into quarters.
1 fresh large Serrano Chile, sliced into paper-thin rounds.  That will be 1 Tbs.
NOTE: If you taste the Serrano as you are slicing it, and it is very hot (too hot for you) then use only half of the chile and make half-rounds.  That will be 1/2 Tbs.

Method
1.  In a 12″ non-stick skillet, heat the Canola oil on high heat, add the salt
2.  When the oil becomes wavy and begins to shimmer, (don’t let it smoke), add the Brussels sprouts and pecans and cook for 2 minutes, stirring so that the sprouts and nuts acquire color.
3. Add the chicken stock and cook, keeping the heat on high and stirring for 6-8 minutes until most of the liquid is gone and the sprouts are still firm.
4.  Add the Serrano slices and continue to cook, stirring, for another 3 minutes to blacken the sprouts but without burning them.

Serve hot.
I suggest you serve this dish as part of a buffet, or serve it with grilled fish or venison or roast turkey.

NOTE: If you found my article helpful, I invite you to follow me on Twitter, Instagram and Facebook, or subscribe below for updates (I'll email you new essays when I publish them).
Texas Mexican Food, A Museum Art Event
“Hojita” — Mezcal & Hoja Santa Cocktail

1 thought on “Brussels Sprouts with Serrano and Pecans”