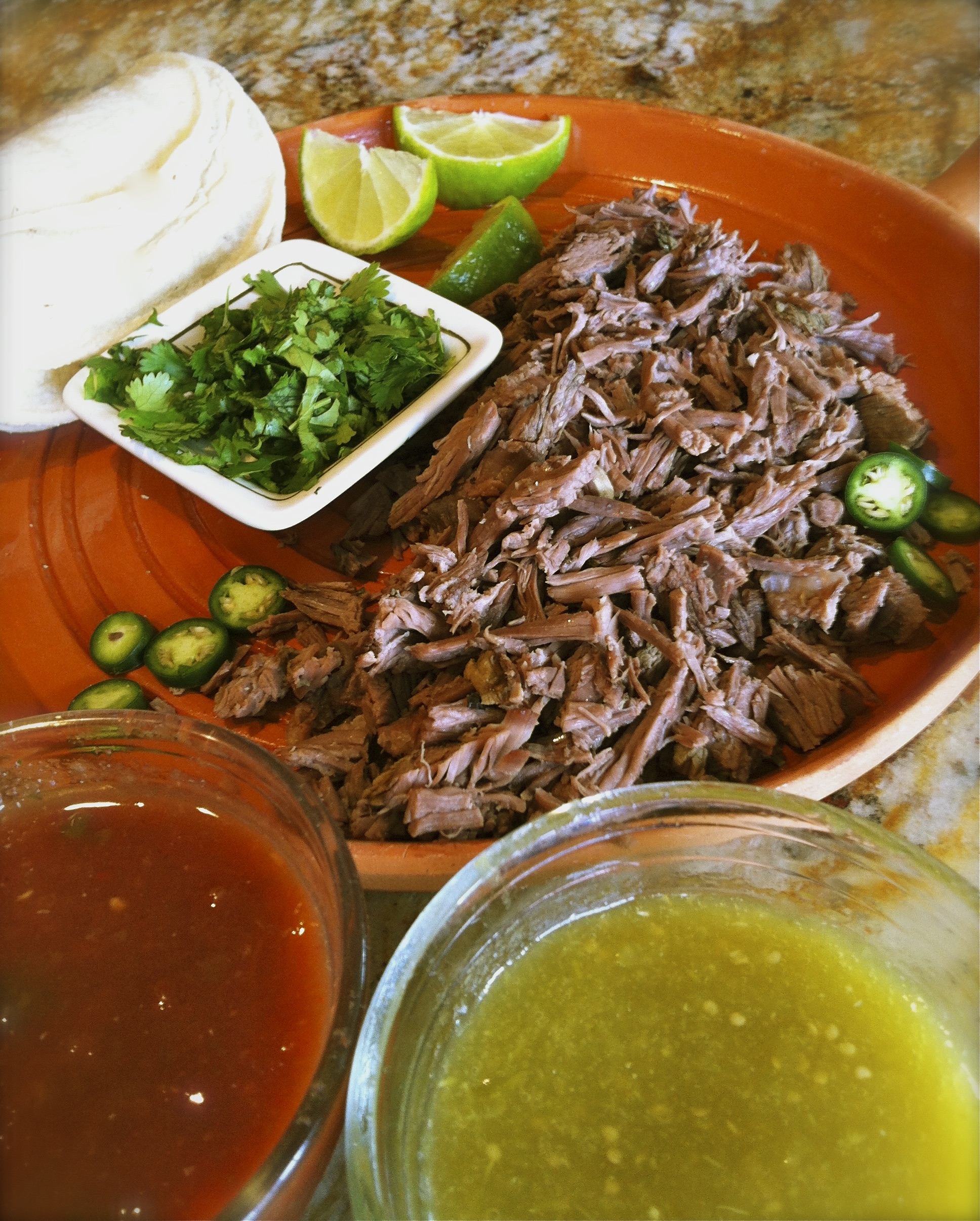 Barbacoa was originally cooked in earth ovens, a culinary technique that is ancient and found all over the globe.  In San Antonio, where there is evidence of human habitation dating back 13,000 years, archaeologists have found layers of heated rocks suggesting that it was part of an earth oven (a pit) built 4,500 years ago. The archaeological site is called Olmos Dam because the dam is nearby. Eight miles southwest of Olmos Dam, my father continued this ancient tradition. He would build an earth oven pit, 3 feet by 3 feet, in our backyard on the west side of San Antonio. Alongside the pit, and accompanied by my uncles and compadres, he would build a very large wood fire that would eventually turn
into a huge pile of coals. While the fire was burning he would prepare a cow head, sometimes a goat or other meat, by wrapping it tightly in burlap. It was at this time that my mother would appear from the house with a bowl of spices, blended with water, and throw them onto the burlap as the meat was being wrapped.

Apá, dad, shoveled half the coals into the bottom of the pit and placed the burlapped meat on top of them.  Again, thankfully, my mother intervened, and with a flourish threw in a bowl of liquefied spices onto the top of the burlap bag. The men shoveled the rest of the coals on top of that, laid a metal sheet over the pit, and then covered everything with dirt. There was a pipe sticking out of the hole.

Eight to 12 hours later the pit was dug up and we enjoyed the most flavorful, moist, delectable barbacoa in the world. It was amazing. This was during my childhood and continued until the 1990s when apá passed away.

Today I don’t have any space in my backyard to build a pit, so this recipe is intended for the indoor home oven. I don’t use a cow’s head or beef cheeks, which are the requisite for barbacoa. If you want to taste delicious authenticity, use beef cheeks instead of the roast I recommend in the recipe. Either way, the result is evocative of the taste I remember, albeit with no smoke. The spices are those my mom used, as best I can determine by checking with my family. I hope you enjoy it, especially with your loved ones.

We continue a 4,000+ years tradition of savory slow cooking.

(Adapted from the cookbook: Truly Texas Mexican: A Native Culinary Heritage In Recipes)

Ingredients (makes tacos for 8)
2 pounds boneless beef chuck
3 garlic cloves, peeled and crushed
1/2 white onion
1/2 teaspoon black peppercorns, crushed
1/2 teaspoon salt
2 2-inch sprigs of fresh Texas Mexican oregano (1/4 teaspoon dry)
Method
Preheat oven to 200°F.
1. Place the beef in a Dutch oven and fill it halfway with water. Add the crushed garlic, onion, black peppercorns, and oregano, and bring to a boil. Turn off
the heat.
2. Cover tightly, place in a 200°F oven and cook for 6–8 hours. Turn the meat over once during cooking.
3. When the beef is done, place it on a cutting board or large bowl and, using forks or wooden spoons, pull the meat apart. Adjust the salt. Keep the meat warm for making tacos.
To make the tacos, serve it with hot corn tortillas, an array of salsas, fresh coarsely chopped cilantro, and Mexican lime wedges.  An abrupt hiatus in all conversation, with groans of satisfaction, will ensue.

NOTE: If you found my article helpful, I invite you to follow me on Twitter, Instagram and Facebook, or subscribe below for updates (I'll email you new essays when I publish them).
Arroz Con Almendras – Almond Rice Adds Elegant Crunch
Gorditas Are For Everyone, A Texas Mexican Tradition