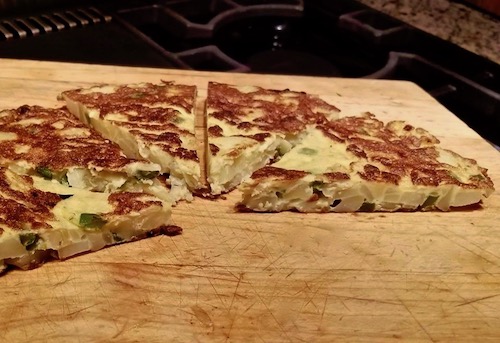 I first ate a tortilla Española on the streets of Madrid, many years ago, at 3 in the morning. The generous, thick tortilla was sandwiched in a 6-inch crusty baguette. I bought it from a guy on the street corner, along with a beer which he retrieved from the small ice chest he was keeping close. It’s a grand memory, near the top of the very best sandwiches I’ve ever tasted.  I’ve had versions of the Spanish tortilla all over Europe and South America, from Lake Titicaca to Copenhagen and down to Tierra Del Fuego.  I’ve been lucky that they always get it right, down to the superb-tasting olive oil.

Here’s my recipe, serves 6, although I eat half of it before it cools down, I love it that much.  In this recipe I’ve cut down on the oil and cholesterol, without sacrificing the taste or texture.

Method
1. Peel the waxy potatoes and slice them in half, then slice each half into 1/8″ to 1/4″ half moons
2. Place the sliced potatoes in a large saucepan and cover them with water.  Bring the water to a boil, then reduce the heat to a low simmer.  Boil for about 15 minutes or until they are soft when pierced with a fork. Drain the potatoes and set aside.
3. Heat 4 Tbs EVOO in a 12″ non-stick skillet over low heat, then add the onion and cook on medium-low heat until they are soft but without getting any color, about 15 minutes.
3. In a large bowl, beat the eggs and egg whites.
4. When the onions are cooked, remove them from the skillet with a slotted spoon, shaking them to remove all the excess oil. You should have about 2 Tbs olive oil left in the skillet.  Add the onions to the bowl of beaten eggs, along with the potatoes.  Stir the mixture to combine completely and add salt according to your taste.
5. Increase the heat of the skillet to medium and add the potato, onion and egg mixture. Cook for about 7 minutes until the eggs set.
6. Slide the tortilla off the skillet and onto a large cookie sheet, cooked side down, then place the skillet on top of the uncooked side of the tortilla.  Using a kitchen towel, lift the cookie sheet with your other hand and flip the tortilla upside down, onto the skillet. Cook the second side, over medium heat, for about 4 minutes until the tortilla is completely set.

Slide the tortilla onto a platter.  Serve it immediately or let it cool for later.  Cut it into small squares and serve as tapas.  It will keep in the refrigerator, covered, for 3 days.

NOTE: If you found my article helpful, I invite you to follow me on Twitter and Facebook, or subscribe below for updates (I'll email you new essays when I publish them).
Chiles Toreados, Your Ultimate Party Snack
Enchiladas Rojas, Red Tortillas are Traditional