The Thanksgiving Turkey Comes From Mexico 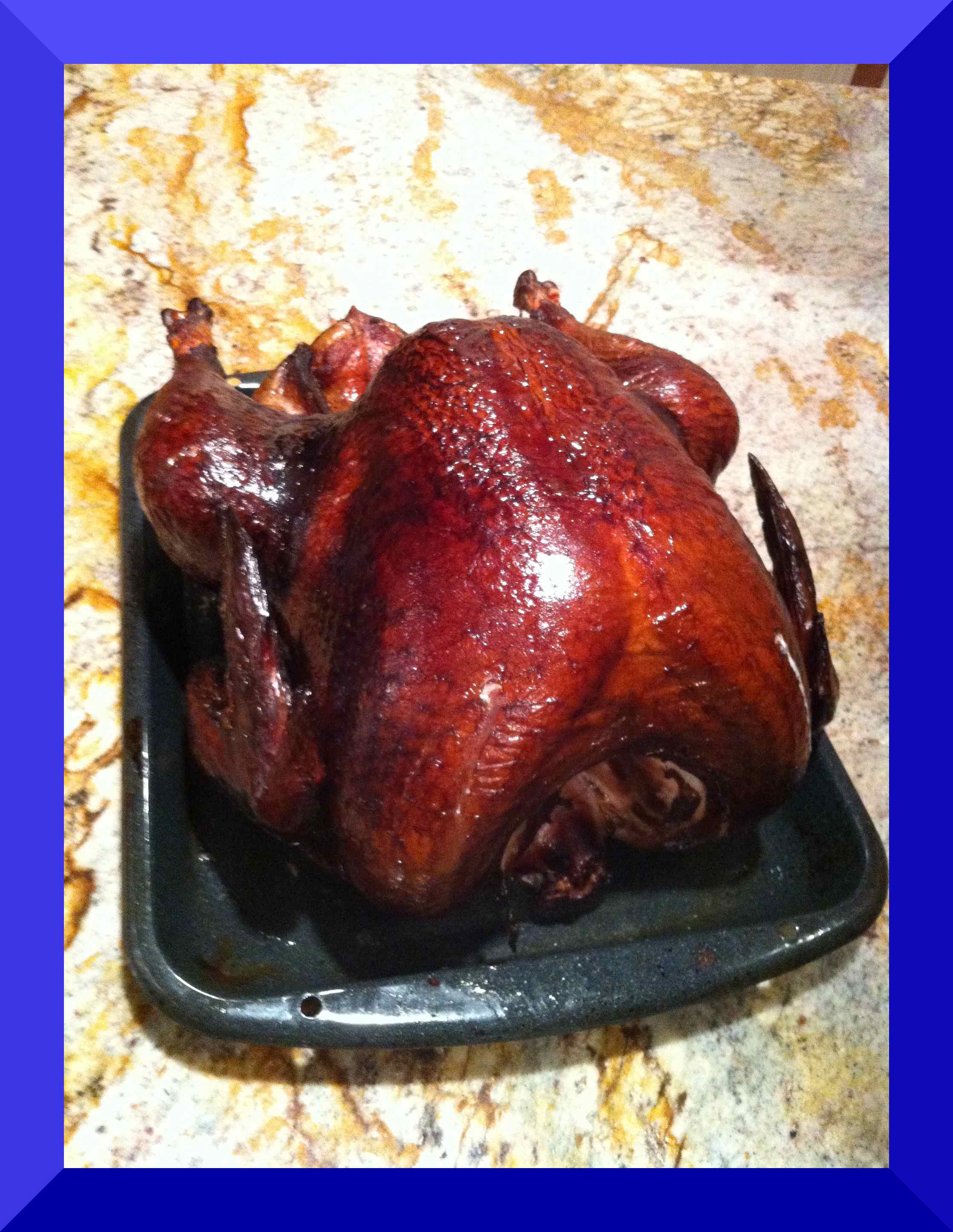 Sacred to the Mayas, and enjoyed at banquets by the Aztecs, the Guajolote (Melagris gallopavo) is our Thanksgiving turkey.  It was domesticated in Mexico and the Américas  before the arrival of the Spaniards.  The name is from the nahuatl word, “huexólotl,” which translates as “big monster” (hueyi = big;  xólot = monster), due to its size, plumage and “snood” that hangs from its beak and that  engorges with blood and extends to hang down over the beak when the male is strutting.

The Mexicas (Native, indigenous Mexicans) related the bird to the God Tezcatlipoca and to the gods of the sun and of life. The bird is really important to our history, heritage and culinary culture.  Oh, right–it’s delicious!

This recipe is for smoking the turkey, a practice that goes back thousands of years and reminds us that:

A) The habit of cooking and eating turkey predates us by centuries and
B) The bird came from Mexico and is native to this land, América.

I’ve placed a dot on the location of Coba, Mexico, near Cancún.  This is where archeologists have found the earliest evidence of turkey remains. They are dated 100 BCE-100 CE. From there the turkey went north and populated North America, evidence of the vibrant trade and communication withiin the region pre-1400’s. By the time the Spaniards arrived in Mexico, we had domesticated turkeys not just in Mexico but also in what is now the US New Mexico and Texas. Thereafter the turkey, wild and domesticated, populated the whole of the US and some of Canada.

RECIPE (If you don’t have time to brine the turkey, smoking it will still be great tasting)

To prepare the turkey for smoking, this is what I used to make the
Brine:
3 gallons warm water
1 lb salt
12 ounces light brown sugar
1 Tbs onion powder
1 Tbs garlic powder
Stir until the sugar and salt have completely dissolved then let the brine cool down completely.
Method:
1.  I used a syringe to inject some of the brine into the meat. the total amount of brine should be 10% of the weight of the turkey.  Here’s the math for a 15 lb turkey.
15 X 16 ounces = 240 ounces
240 ounces X .10 = 24 ounces of brine. (FYI: One fluid ounce of water weights exactly 1 ounce)
2.  Using a plastic or stainless steel container, submerge the turkey in the brine and refrigerate for 3 days. The container was too heavy and large for my refrigerator so I partially filled a large ice chest with ice and a little water and set the container in it.  Closing the ice chest, the temperature is maintained at a safe 37-39 degrees F
3. After the third day, remove the turkey from the brine, rinse it thouroughly with fresh water, pat dry and place in the fridge, uncovered, for 16 hours until a pellicle forms on the skin.  This tacky glaze will help absorb smoke and keep in the moisture.  I hate to say this but in the interest of efficiency, omit this step if you don’t have time to do this or if there’s no room in the fridge.
4. Smoke the turkey in Pecan wood at 185 F for about 6-8 hours until the internal temperature reaches 165 F.

Let me know how it turns out if you decide to smoke for Thanksgiving.  ¡Feliz Día de Dar Gracias!

NOTE: If you found my article helpful, I invite you to follow me on Twitter, Instagram and Facebook, or subscribe below for updates (I'll email you new essays when I publish them).
Chile Con Queso Soufflé
Mole Poblano For The Holidays– “Beyond A Sauce”

2 thoughts on “The Thanksgiving Turkey Comes From Mexico”