Smoked Trout, the Karankawas and Cannibalism 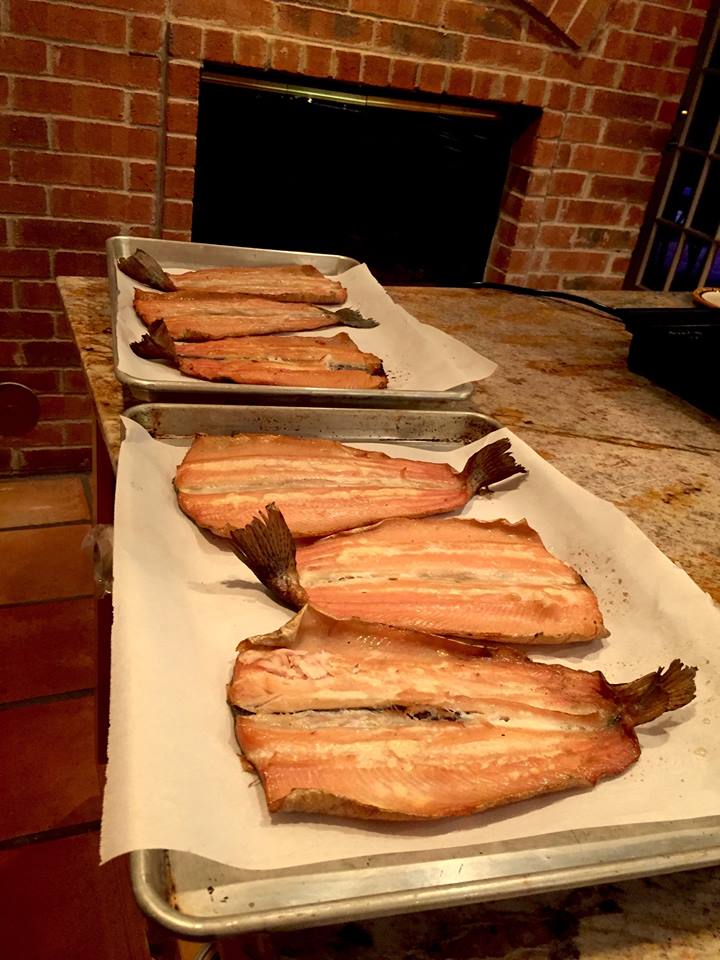 Smoked trout is a favorite of mine for dinner parties because it brings the outside in.  It’s also deeply entrenched in our Texas Mexican culinary tradition of outdoor techniques of salting, drying and smoking.   Many techniques (pickling, brining, drying, freezing and smoking),  take us back to a time when we were more in tune with the earth’s changing seasons. Being at one with the earth and seasons makes food delicious.

Here’s a recipe for smoked trout that I served as a first course at the Museum Of Fine Arts, Houston, accompanying a lecture that I presented on food as art. The final result is flaky, aromatic and richly flavorful.  It can be mixed and mingled with an array of creams butters and dips during cool autumnal evenings as well as spring and summer dinners al fresco. 1. Add the salt, sugar and spices to the water and bring to a boil, stirring to dissolve the salt and sugar completely.
2.  Cool the hot brine mixture by pouring it over the ice

2 8-ounce trout filets
If you possibly can, opt for pan dressing the trout, which means leaving the bones, skin and tail intact.  As you can see in the picture, I used skin-on fillets because that’s what was readily available from the fish monger this morning.

Pour the brine over the fish, making sure it is completely submerged.

Place in the refrigerator for 8 to 12 hours.  Then remove the fish from the brine and lay the fillets flat on a tray and dry them, uncovered, in the refrigerator for about 8 hours or until a dry, tacky glaze, “pellicle,” forms on the lovely fillets.  This pellicle formation is critical at the time of smoking because it maximizes the smoke flavor and keeps oils and moisture where they belong.

You’ll smoke the trout for 1 1/2 to 2 1/2 hours, depending on the thickness of the filets. The fish must reach an internatl temperature of 145ºF.  Use a meat thermometer to make sure it is cooked, since that is more accurate than cooking by time.  The fish will be flaky and opaque,.

In the next blog I’ll show the smoked trout and the various ways it can be served.

Just a few final thoughts about our tradition of drying fish.  I’m reminded of a recent discussion regarding one of our ancestor Texas peoples, the Karankawas.  They lived for thousands of years along the Texas coast from Galveston to Corpus Christi. They ate speckled trout, among other fish, and drying and smoking were of course known culinary practices.

The discussion leader reported that the Karankawas were horrible savages who pierced their skin for adornment and were cannibals.  They were generally ugly, awful, I repeat, savages.

Then was not the proper moment to refute but here I want to report that the current body of academic research (see bibliography at the end of this post) finds the following:

1.  Piercings: Karankawa men were aound 6 feet tall and they sometimes pierced their nipples  and lower lips to wear cane adornments.  Here in Houston I’ve seen a lot of men and women with piercings, wearing body jewelry.  I’m not calling them savages for doing so.

2.  Accusations do not make it so:  The accusation of cannibalism is so often repeated, mainly by those with a vested interest in discrediting natives, that the repetition tends to make it so.  But there is no direct oral nor written evidence.  There is no direct eyewitness account of such behavior.  There is no archaeological evidence at all of scraped or shattered bones to support the claim of cannibalism.

3. The record refutes the claim: When the Spanish colleagues of Cabeza de Vaca shipwrecked onto Galveston Island, they began to eat the bodies of their shipmates to stave off starvation.   When the Karankawas found them they were horrified at the Spanish cannibalism.  Cabeza de Vaca writes: “The Indians were so shocked at this cannibalism that, if they had seen it sometime earlier, they surely would have killed every one of us who had survived.”  (La Vere, 2004,  p. 60-62)

We receive culinary techniques from our ancestors, enjoy the same seasonal fish as they did, so I delight at the academic work that is giving us a clearer picture of who they really were.

In my next blog I’ll be serving the smoked trout to some of my nose-pierced friends!

NOTE: If you found my article helpful, I invite you to follow me on Twitter, Instagram and Facebook, or subscribe below for updates (I'll email you new essays when I publish them).
A Serving of Justice
Smoked Trout w/ Horsradish Butter Canapé

2 thoughts on “Smoked Trout, the Karankawas and Cannibalism”