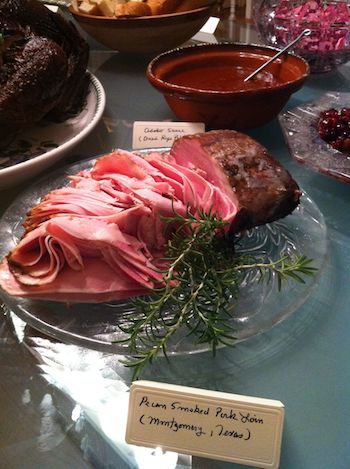 Smoked pork is the perfect party buffet dish, served with a finger-licking sauce, Chile Ancho Adobo.  Here’s a smoked pork loin recipe with pecan wood that results in a succulent, melt-in-your-mouth dish, just in time for this cold weather and friends.  I suggest you make TWO of them,  they’re that delicious.

By keeping the temperature at 185º F and making sure the smoke does not turn densely white for too long a time, the smoke flavor is subtle, sweet. Thin blue smoke, TBS, adheres as a lighter smoke taste, over a longer period of time, and thick white smoke, TWS, will adhere quickly with a very strong smoke taste.  Thick white smoke can also add a bitter taste to the smoked pork, depending on the wood.  I advise that you do your best to keep the smoke blue and the smoked pork will be amazing.

We did not always think pork was delicious.

Along with horses, pigs were the first European animals to be brought to the Americas by the Spaniards.  Our indigenous ancestors did not readily welcome the Spanish pigs. The “Relación De Michocán,” written in 1540, describes the reaction of the Michoacán king, Tzintzicha, when the arriving Spaniards made the mistake of gifting him with ten pigs:

“What are these things?” he said upon seeing them, “These people are bringing rats?” (De Alcalá, 1540)

Tzintzicha immediately ordered the pigs killed, because he considered them not just giant rats, but also an omen of bad luck.  He was right about the second. Don’t let this story put you off pork. Eventually it became culinarily accepted and commercially important.

Two 3-lb pork loins
3 gallons of brine
First, the brine
Ingredients
2 1/2 gallons room temperature water
1/2  gallon ice
2 lb salt
1 lb brown sugar
1 ounce TCM (tinted curing mixture, also called Prague powder #1)  Note: Being aware of the pros and cons of nitrates and nitrites in TCM, I think this is a safe, moderate use of nitrite.  TCM prevents botulism, a foodborne illness caused by bacteria that grows when meat is cooked at very low temperatures over a long time.  TCM will also give the loin a nice pink cast.
Method:
1.  Add the sugar, salt and TCM to the water and stir until completely dissolved.
2.  Add the ice to cool the brine.
3. Cut off excess fat and weigh the pork loins.  Inject them with an amount of brine that equals 10% of their weight.
ARITHMETIC: Injected brine for a 3 lb pork loin would be thus: 3 lb loin X 16 ounces = 48 ounces.
Then 48 ounces X .10 = 4.8 ounces.  So you’d inject 4.8 ounces of brine. (it’s convenient that 1 fl. oz. of water weighs 1 oz.)
4.  Place loins in a stainless steel or plastic container and completely cover them with the brine.  Top them with a heavy dish to keep them submerged.
5.  After three days of brining, remove them, rinse with fresh water and pat them dry and place in the fridge, uncovered, for 16 hours until a pellicle forms on the skin.  This tacky glaze will help absorb smoke and keep in the moisture.  You can omit this step if you want. I always do it, but it’s not essential.
6.  Then smoke the pork in pecan wood at 185° F for about 6-8 hours until the internal temperature reaches a minimum of 145° F  and not more than 150° F.
Knife Skills and Slicing:

When I served it at the buffet table, the slices were ultra thin, as you can see in the picture.  This makes for a beautiful presentation but also adds to the melt-in-your-mouth texture. Chef Kevin Babbitt, fellow CIA grad, helped me prepare the buffet feast and to him goes the credit for slicing the pork and arranging it as you see it laid out in the picture (revelers got to it really fast).  He is the Sous Chef at Texas Meat Company in Boerne, and also Sous Chef, leading the fine dining at Cypress Grille.

When I was at the CIA our class of 18 culinary students was drilled for 3 weeks in “precision knife skills.” It takes a lot of practice to get wafer-thin slices, and you use a very long slicing knife that is razor sharp.

It’s been a long time since the 1500s when pigs arrived and were thought to be giant rats.  They’ve become an integral part of outdoor cooking. Let me know how your smoked pork turns out.
NOTE: If you found my article helpful, I invite you to follow me on Twitter, Instagram and Facebook, or subscribe below for updates (I'll email you new essays when I publish them).
Achiote Green Beans – From Yucatán
Arroz Con Almendras – Almond Rice Adds Elegant Crunch