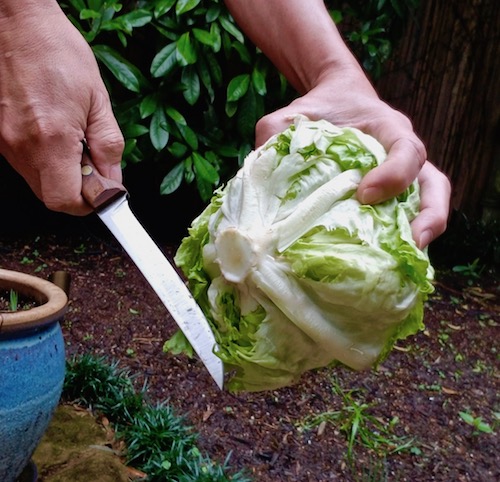 In the 1950’s the Iceberg lettuce wedge with blue cheese dressing was ubiquitous in the US.  It remains a cool retro food on many menus and when I see it, I can’t resist ordering it.   Fresh, lush, delicious, especially when the iceberg lettuce wedge is so crispy that it is actually brittle, crackling when you cut it with a fork, the blue cheese  dressing dripping lavishly.

I used to pick iceberg lettuce during the summer months, as a farmworker in Texas. Stooped over, knife in one hand, I’d use my other hand to grab the lettuce head. Quickly slice the root, place the head in the basket, repeat.  It was dirty, back-breaking work, and I knew I had to work fast in order to pick enough lettuce to take to market.  Day after day, the same thing, sweating in the summer sun, no running water, no bathrooms.

By 1970 I was no longer in the fields but in school. It was the year that, Cesar Chavez and Dolores Huerta of  the United Farm Workers (UFW) called for a national boycott of iceberg lettuce because the lettuce growers would not recognize the United Farmworkers Union, thus refusing to negotiate about the working conditions and pay.  $1.25 was the per hour average wage for pickers. Farmworkers lacked any health, education, or housing facilities.  There were no bathrooms either.  Moreover, growers had the ability to fire workers who objected to the conditions, and draw upon the large pool of unskilled migrant workers, largely Mexican-Americans, to make up their work force.

“Secret Ballot” was  crucial to the efforts of The UFW to organize the workers in California’s Salinas Valley.  The secret ballot guaranteed protection of the workers from intimidation.

I supported the boycott vigorously, through the 1970s,  participated in rallies to raise awareness.  My chest swelled with hope upon learning, in 1973, that the US Catholic Bishops called for support of the iceberg lettuce boycott.  At their annual meeting on November 16, 1973, the bishops took a formal, public stand:

During the boycott we ate Romaine lettuce.  Eating in a mindful way showed that we were at one with the United Farmworkers.
Today we can eat Iceberg lettuce, so I served my lettuce wedge recipe last night. The Iceberg wedge with blue cheese dressing (gooey, lava-like, creamy, delectable) will take you to a place of nostalgia and, hopefully, solidarity.

Method
Make a thoroughly smooth paste (no lumps) of the onion and garlic using a mortar and pestle.
Combine the paste with all the other ingredients and whisk until well blended.
Pour over each of the wedges and sprinkle with the diced red onion.
Crunch, crunch — and excess of lavish blue cheese lava!

NOTE: If you found my article helpful, I invite you to follow me on Twitter, Instagram and Facebook, or subscribe below for updates (I'll email you new essays when I publish them).
Empanadas De Pino, Iconic Dish Of Chile
The History of Texas Mexican Cooking