Lest we become what we despise

Bin Laden was a monstruous mass murderer. An arrogant, evil man with no conscience. I’m glad he’s dead and not able to kill. But celebrating his death is a thorny thing.
Paul Brandeis Raushenbush, religion editor of the Huffington Post, masterfully frames our collective moment in terms of grief and relief. His type of celebration takes us away from destructive hatred and toward a society of sane human beings. He writes: 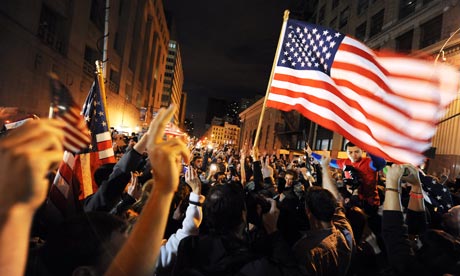 “I was a chaplain at Columbia University during September 11, 2001. Two days after the attacks, some of my students put on an art exhibit in response called Peace Kitchen. In one piece a student had put a film of bin Laden’s face over a mirror so we saw our own face staring back at us through his. The point was not that there was equivalency between Bin Laden and us, but to acknowledge that evil is not something that only exists outside of us that we can point to and kill once and for all. Evil doesn’t work like that. All humans have the potential for grace, but we also all have the potential to sin and do evil. It is a tempting yet dangerous practice to look around the world for evil people and target them. That is just what Osama Bin Laden thought he was doing. We must be vigilant that we do not become what we despise. We must be careful in the way we use religion and the name of God to further our own causes or to ever manipulate people into hate or hate.
So, let us mute our celebrations. Let any satisfaction be grim and grounded in the foundation of justice for all who have suffered at bin Laden’s bloody hands. And also justice for crimes against God — for using God as an instrument of terror and and promoting distrust between peoples of different religions and nations. Let us put bin Laden’s body in the ground, and in doing so bury his disastrous and blasphemous religious legacy. ”
May we hear, read and see more of this type of “celebration.”

NOTE: If you found my article helpful, I invite you to follow me on Twitter and Facebook, or subscribe below for updates (I'll email you new essays when I publish them).
Cooking Delicious Mexican Food For Justice
Memorial Day New Music: “Saints and Devils”