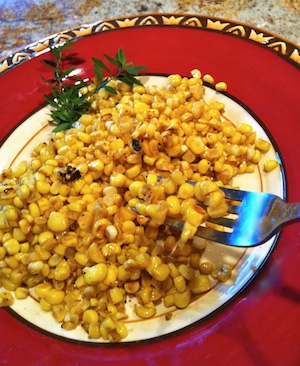 This fresh corn skillet, Guisado De Maíz, is all about simplicity and the importance of basic cooking techniques.

“Do the basics brilliantly”  was the constant mantra of one of my chef instructors at the Culinary Institute of America, Chef Hinnerk Von Bargen. It was also the oral and lived tradition at home.  Both my amá and apá often told me: “pon atención,” be attentive, be diligent.

I learned care and technique from the “práctica” at my mother’s side and to this day, my mother’s kitchen is my culinary compass. This Guisado de Maíz, is a perfect example of the importance of basic skills:  knife skills, proper  timing, controlled heat, and just a sprinkle of salt, that’s all.  You will taste the sweet, lush wonders of  mystic corn.

Maíz, what we call corn, is a divine grain.  By this I mean that it is at the center of sacred stories and is at the core of what it means to be human.  In Mexico, where corn originated and was first cultivated, 8,000 years ago, the view is that our flesh and blood are made of corn.  Founding philosophies and stories of US Native Americans include corn as a central theme.

We call it “elote.” When my amá would make this guisado, sautéed elote for us, she would sit outdoors, peel off the shucks and, with a machete-looking chef’s knife, slice away the kernels from the cob.  She’d make a big batch for us. It was creamy and crunchy at the same time.

Method:
1. Heat a cast iron skillet or other heavy skillet on high heat and add the canola oil
2. When the oil is very hot and shimmering, add the fresh corn and spread it evenly across the skillet, allowing it to brown a bit. Cook for 3 minutes, stirring occasionally.  There will be some popping.
3. Add the water and deglaze the skillet, scraping loose all the bits that are stuck to the bottom of the pan. Heat until the water is almost completely evaporated but the corn is still moist. Taste and adjust the salt.

Simplicity sometimes can be a revelation.

NOTE: If you found my article helpful, I invite you to follow me on Twitter, Instagram and Facebook, or subscribe below for updates (I'll email you new essays when I publish them).
Arroz Con Leche: Best Latinx Comfort Food
Roasted Anaheim Chiles Make Perfect Tacos