6 Mexican Sweets For The Holidays 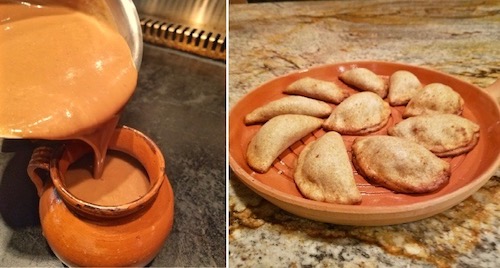 Holiday Mexican sweets are all about memories for me. Whether you bake alone or with your siblings and friends, I recommend that you make at least one of these holiday sweets. It’s a part of life that you’ll enjoy now, and you’ll take those memories into the future.  I’ve tested all of these recipes in my kitçhen, so if you follow the basic steps for each recipe, you’ll bake with success.  These are recipes for 3 desserts and 3 beverages to make your holidays cheery and gay.

Menu of Traditional Mexican Sweets For The Holidays! Every Mexican American person that I know recalls empanadas de camote from their childhood, they’re just ubiquitous.  The empanada dough is made with whole wheat flour and has a hint of anise. Here’s the recipe: Empanadas De Camote Mazapán is a peanut candy that’s one of the most traditional Mexican sweets.  The nice thing is that you don’t have to bake them, but simply churn them in a food processor.  I love this little candy.  Here’s the recipe: Mazapán Cinnamon is for holidays, and these cookies celebrate the pure cinnamon taste.  They are crumbly and fun to make because they have to be rolled in cinnamon just as they come out 0f the oven. Yum!  Here’s the recipe: Hojarascas You don’t add milk to this traditional Mexican chocolate. Cows were introduced into Mexico after the conquest. Before then, we enjoyed the pure taste of sweetened chocolate, frothy and hot.  Try it, and you’ll see why milk is not needed.  Here’s the recipe: Chocolate Mexicano The quintessential Mexican beverage, it’s a type of  atole, a thick drink, made with corn flour. This is as traditional as you can get. The Spaniards wrote about atole when they began their conquest of the Americas, describing it as healthy, delicious, and customary among our indigenous ancestors.  Here’s my recipe: Champurrado. So, this is not a tradition, perhaps only in my home, but I love it.  It somewhat resembles the traditional Mexican holiday drink, Ron Pope, that is made with egg yolks, milk, and rum.  This’ll have far fewer calories, non of the cholesterol in egg yolks, and plenty of tasty rum.  Here’s the recipe for Horchata, you simply add 1 1/2 ounces of rum to each glass and stir it thoroughly:  Horchata

Have a beautiful holiday season!

NOTE: If you found my article helpful, I invite you to follow me on Twitter, Instagram and Facebook, or subscribe below for updates (I'll email you new essays when I publish them).
The Malt House of San Antonio, Gone But Not Forgotten
Menudo: A Celebration Of Community