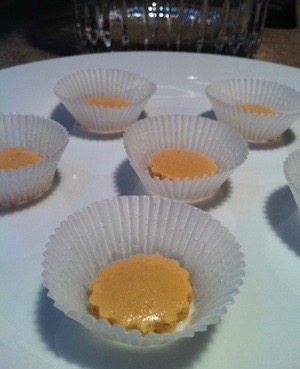 Mazapan Mexican peanut candy is lush and delicious, and it’s the perfect weekend recipe because it requires no cooking.  I suggest you call up some friends and have fun making Mexican mazapán.  Make a big batch, like I did, and you will also make memories.

Let’s go down memory lane, over five years ago, when I made mazapan Mexican peanut candy for an art show.  It was presented as an art object, and eaten, at an art exhibit held in February, 2010 in Houston, Texas, titled “The Candy Shop.”

I was invited to collaborate with three visual artists, Raúl Gonzalez, Edu Portillo and Andre Amaral.  They created sculptures, acrylic paintings and I made candies to be presented as edible art objects.  “The Candy Shop” was hosted by  “Fresh Arts,” and the exhibit was an exploration of the fast-changing and dynamic Latinx  experience of identity, community and nostalgia.  The organizers explained: “From cuisine to everyday products, society is becoming increasingly  influenced by Latin American arts and cultures.  The exhibit features Brazil, El Salvador,  and US Chicano candy culinary perspectives.”

So, for this art show I wanted to emphasize how making candy and eating it is a way of re-making our identity, staying current while deeply rooted.

Traditional mazapán is a cousin of marzipan which originates in Asia and the Middle East and is made with almonds and sugar.  Mazapán is distinctly Mexican in that it uses peanuts instead of almonds.  The Spanish word for peanut is “cacahuate,” which comes from the original Mexican name in the Nahuatl language, tlacáhuatl.  Tlacáhuatl is composed from the words tlalli, earth, and  cacahuatl, cacao, so the little peanut is known as “cacao of the earth.”

Cacahuate is native to South America, and was cultivated in Tehuacán in the Mexican state of Puebla long before European contact.  Archaeology and native documents give evidence of cacahuate farming in Tehuacán dating back to 200 CE (AD).

This traditional recipe adds corn starch which is of course native to Mexico.  Once you bite into these, you’ll love the almost peanut-butter sweet taste.  Some have called it Ruiz’s pieces!

Method
1.  In a food processor, process the ingredients until they form a pliable dough that feels like putty.
2. Roll out the dough to a 1/4″ thickness
3.  Using a round fluted cutter, form the candies and set aside for storage.

They are ready to eat!

NOTE: If you found my article helpful, I invite you to follow me on Twitter, Instagram and Facebook, or subscribe below for updates (I'll email you new essays when I publish them).
Cornbread: A Texas Mexican Recipe
Arroz Con Pollo, A Delicious Tradition